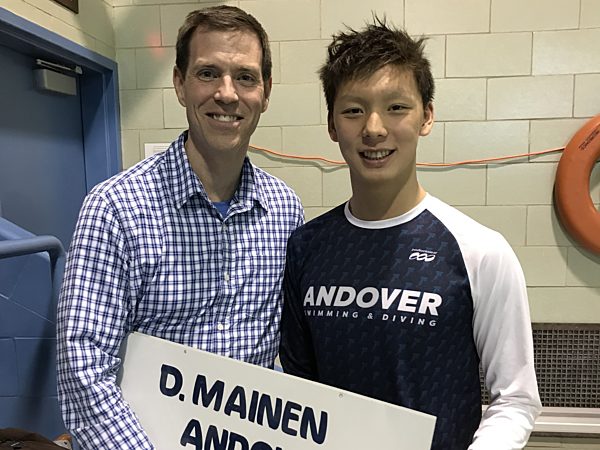 For a comprehensive history of the swimming and diving program, including season records dating to 1912, the progression of school records, and historic photos, please visit Andover Aquatics, a site maintained by former coach, Jacques Hugon '79.


1919: Neil Stilwell '21 set the WORLD record in The Plunge at 74.5 feet. The Plunge entailed diving in and letting one's momentum propel him until he stopped or needed a breath, no kicking or pulling or other means of propulsion allowed. Current USA National Team member Andrew Wilson ’12 had talent for the event. Riku Tanaka ’20 is our current champion—and looks to challenge Wilson some day.


1946: Captain, Don Lazo. Coach, Rocky Dake. In July 1945, Jim McLane '49 was invited to join the Yale squad at an international competition in Cuba. Because he had just completed 8th grade, Jim had no school to represent. So, Head of School Claude Fuess allowed Jim to matriculate at Andover before 9th grade, which may be the only time that’s ever happened. Jim represented Andover. Upon winning his event, Jim got on the podium with an “A” taped to his sweatshirt. The next summer, after 9th grade, Jim returned to Cuba and broke the WORLD record in the 800 Meter Freestyle. WATCH: https://youtu.be/zhlfoMDkkZE

BOB BRAWNER ’48. Came to Andover for a PG year. At the first practice, Coach Drake said that the pool, called “the foot bath,” was too crowded and bumped him and John Turner from the interscholastic team to the club team. The next day at the club practice, Coach told Bob to swim a 100 Breaststroke, and he responded, “But I’m a freestyler.” Coach said to do the Breast. Bob got out of the pool and sat on the bench while Coach studied his watch carefully and announced Bob just broke the school record. He returned to the interscholastic squad. After Andover, Bob held a WORLD record, four AMERICAN records, and won four NCAA Championships in Breaststroke.

JIM MCLANE ’49. Between ages 13-17, Jim won 13 Senior National titles. Between 11th and 12th grade, Jim represented USA at the 1948 Olympics in London winning Gold in the 1500 Free, Silver in the 400 Free, Gold in 4x200 Relay. Jim captained the Freshman team at Yale in the 1950 season, and freshmen were not allowed to compete interscholastically. So, Robert Kiphuth, legendary Yale coach, (whose son captained Andover’s great 1936 team that went 7-1) split the Yale team, upperclassmen on the A team and freshmen on the B team, and entered both in the AAU Swimming Championships (the senior national club championships). The Yale freshmen won the national championship! Jim won multiple NCAA titles and set multiple WORLD records. In 1952, he captained the USA Team at the Helsinki Olympics, and won another Gold medal in the 4x200 Relay. He was inducted into the International Swimming Hall of Fame in 1970.

RICHARD THOMAN ’49. Entered Andover as an 11th-grader and set NATIONAL records in the 50 Free and the 150 IM. He joined Jim McLane at Yale from 1949-1953 and won multiple NCAA championships, AAU national titles, and set WORLD records in both Backstroke and in several Free relays.

Carroll, Brawner, McLane, Thoman were all NCAA All-Americans. And 3 of them set WORLD RECORDS. And all were on the same high school team in 1948!


1960: Captain, Elliot Miller. Coach, Reagh ‘Doc’ Wetmore. 7-2 with wins over Brown and Harvard Freshmen. Among many:

DAVID HACKETT ’61. Champion swimmer, captain of the soccer team, member of the lacrosse team. After Princeton, he was commissioned a 2ndLT in the Marine Corps in 1965. By 1967, he was 2nd in command of his battalion. On 4/30/67, 1st LT David Hackett ’61 was killed in action, and he received the Silver Star posthumously. While flipping through a photo album after 40 years of coaching at Andover, Frank “Deke” DiClementi was asked who was the best boy he ever coached. He quickly replied that every boy was special. When he got to a photo of Hackett, though, he teared up and said, “They don’t come any finer than young David.”

Sartore '65 and Phillips '65 were each 5x All-Americans. Noll '66 was a 6x All-American, the National Prep School Champion in the 100 Backstroke, and only the second individual swimmer inducted into Andover's Athletic Hall of Honor.

Going into New Englands, Neville, a 7x All American, already held the NEW ENGLAND record in 100 FL (53.3) but focused on relays at the meet--after breaking 7 records during the dual-meet season. He was Top 5 in the nation among all Prep School swimmers in the 50 and 100 Free and the 100 Fly, and his 21.8 in the 50 was the 8th fastest performance by any high-schooler in the nation in 1971.

During his senior year, Kazickas, a 7x All American, was the National Prep School Champion in the 100 Back.


1974: Captain, Mark List. Coach, Bill Shrout. A team with a remarkable history. Mark List ’74, John Kingery ’75, Duncan Pyle ’74, and John Croll ’74 flew to Lawrenceville to compete at the Eastern Championships. As a team, Andover placed 4th--WITH ONLY THOSE 4 SWIMMERS--defeating squads with more than 20 swimmers, including Lawrenceville and Deerfield, teams that had defeated Andover in the regular season.

The 4 set the NEW ENGLAND record in the 400 Free Relay for 2nd. The Phillipian notes, “In order to make the trip, each swimmer had to pay $50 for transportation and a place to stay as the school would not sponsor the trip.”

Despite winning 8 of 11 individual events against Exeter, the team lost 88-84 on new scoring rules. At New Englands, the team won 6 of 11 events and placed 2ndto Deerfield.

List '74 was the National Prep School Champion in the 100 Back in both 1973 and 1974 (yes, Andover had the top Backstroker in the nation among all prep schools for 3 years in a row!). List's time during his senior year, 53.4, was 7th among all high-school swimmers. He won the
Babcock Award for being the top swimmer in New England, and he was the 1st person to repeat as Phillipian Athlete of the Term.


1982: Captain, Scott Malcolm. Coach, Chuck Willand. A young team that placed a great letter in the Phillipian, “While we may not be the best team Andover has ever had, we do feel that we have a great deal of spirit and will thoroughly enjoy the season as much (if not more) that any other team in the past.” At Easterns, Malcolm became the 1st New Englander under 1:00 in the 100 Breast. In prelims, he swam 59.98. In finals, 59.68 and placed 3rd. At New Englands, he lowered his own NEW ENGLAND and SCHOOL records to 59.06. The school record stood for 14 years; the time is still 12thon our All-Time depth chart. Malcolm began his Andover career as a diver.


1987: Co-Captains, David Goldstein & Charles Strout. Coach, Loring Kinder. After New Englands, Goldstein praised teammates’ spirit and achieving best times, “This is what swimming is all about.” He entered Andover as a distance swimmer, yet at New Englands, he broke Tim Neville’s 16-year-old SCHOOL record in the 50 Free (21.78). His 47.6 in the 100 Free set another SCHOOL record. Goldstein, Richard Kotite ’87, Caleb Hellerman ’88, and David Mainen ’89 combined in the 4x100 Free Relay to set the SCHOOL record (3:14.57), a record that stood until 2006! 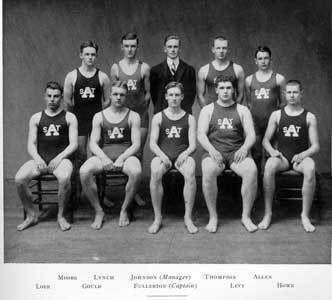 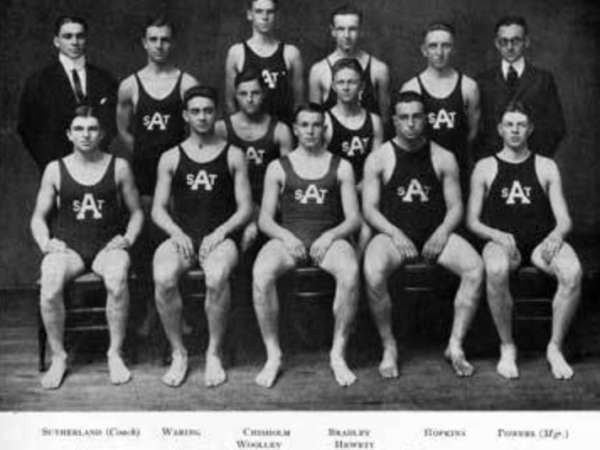 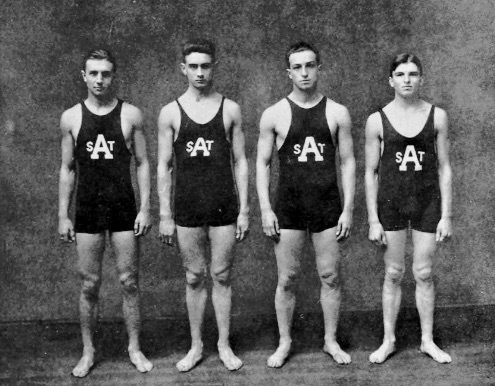 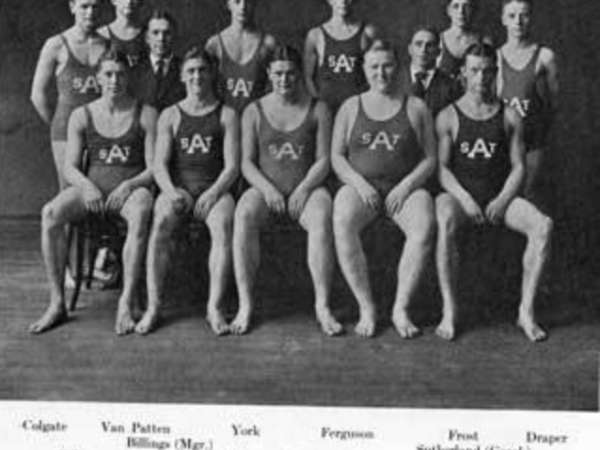 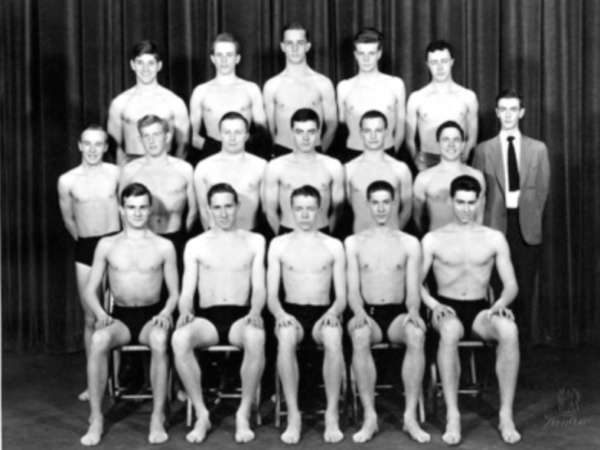 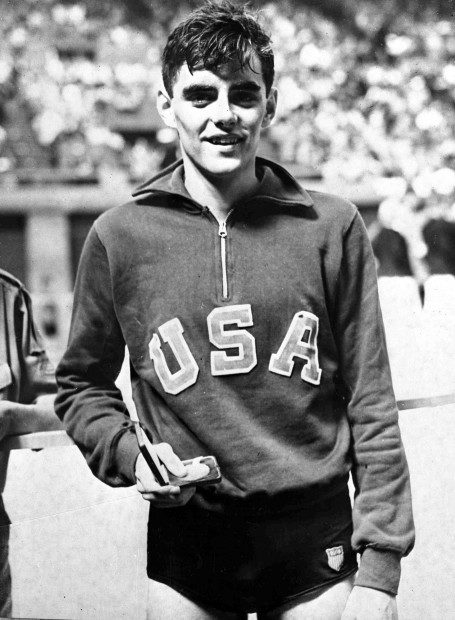 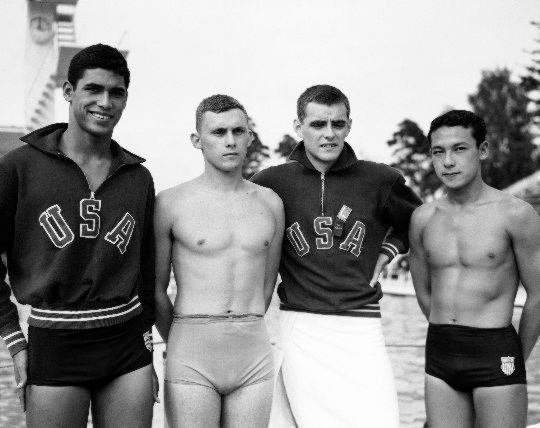 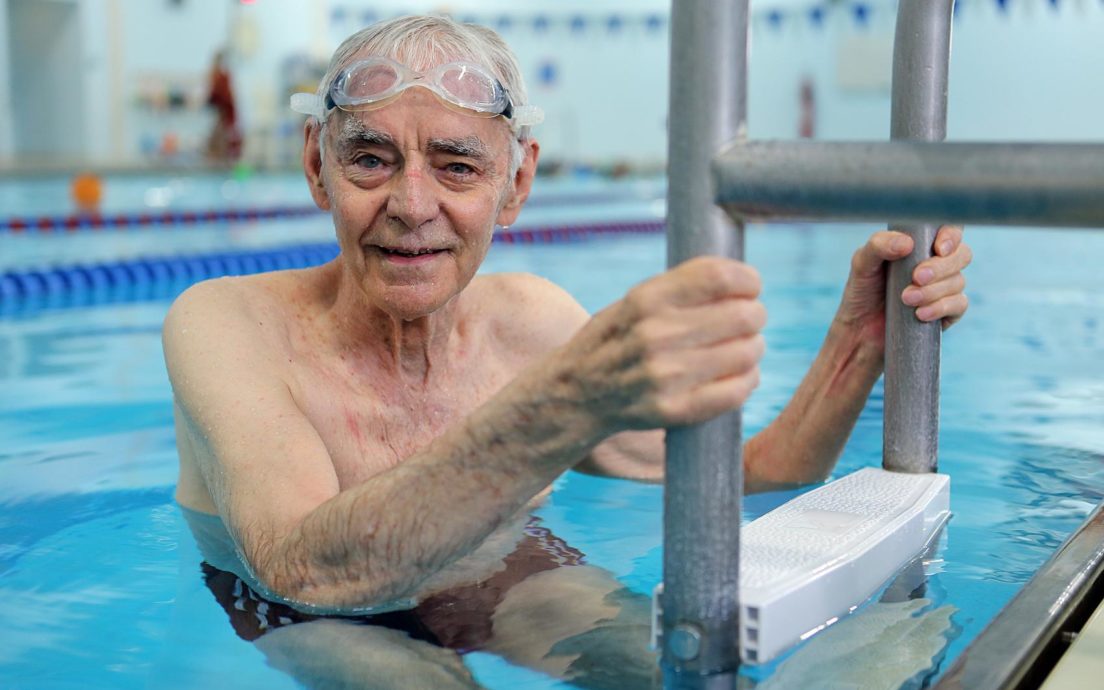 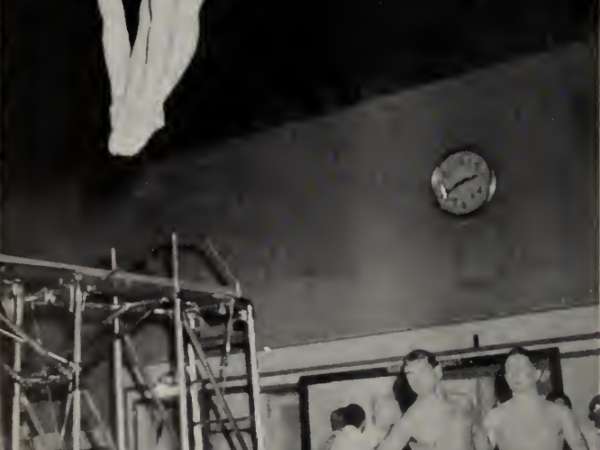 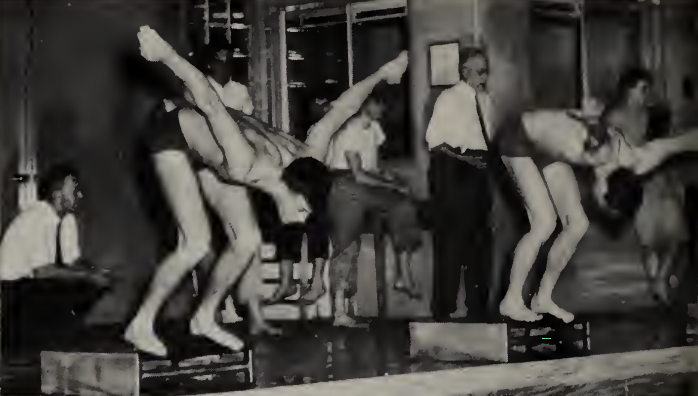 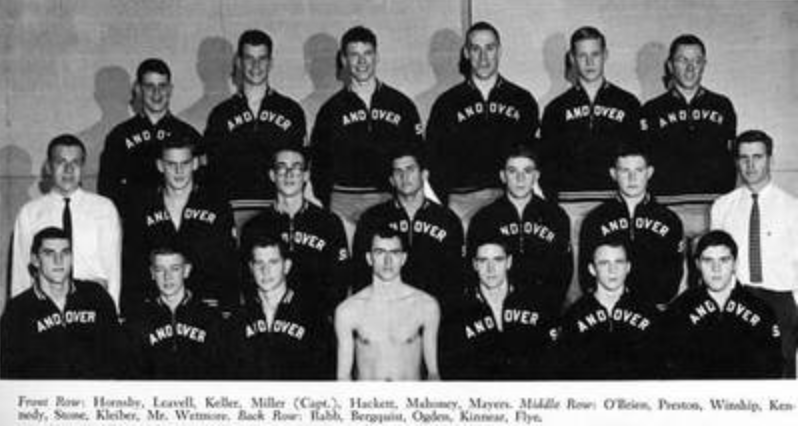 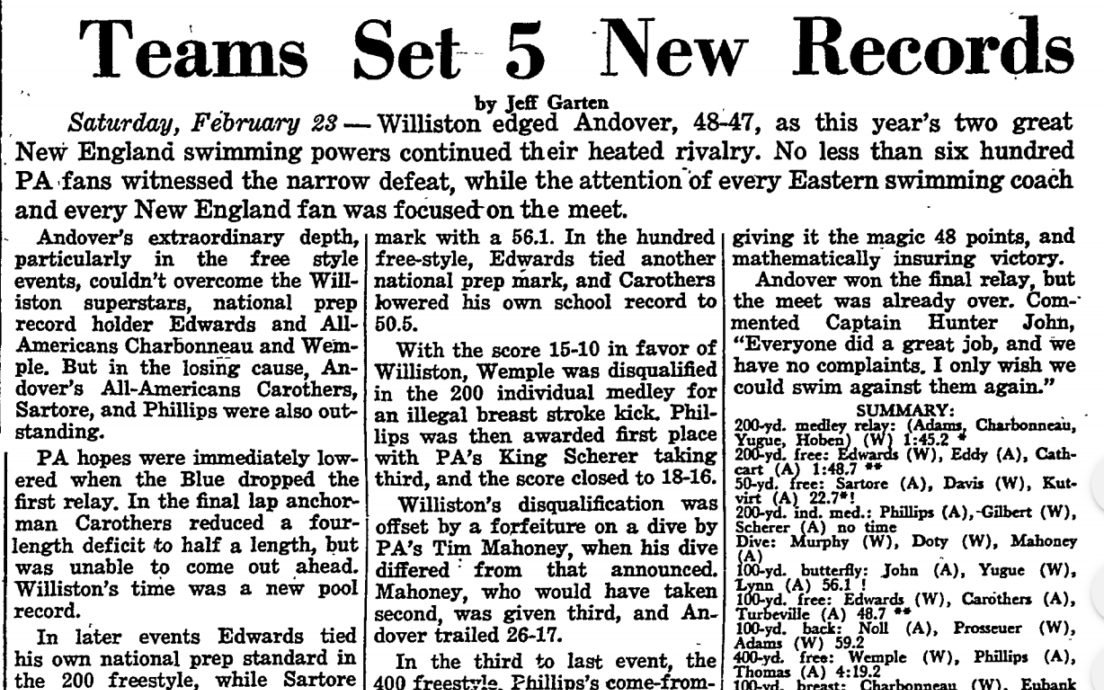 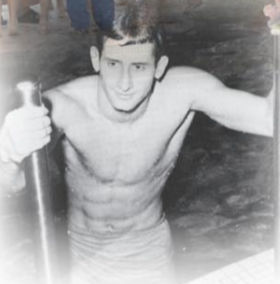 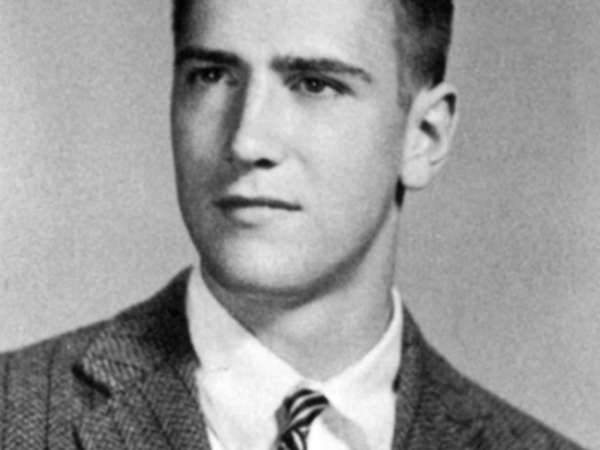 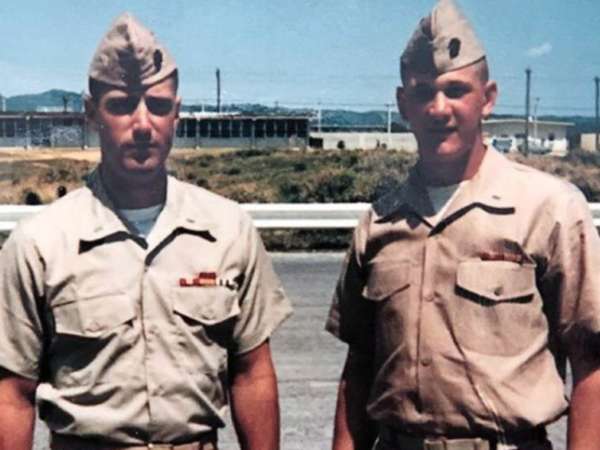 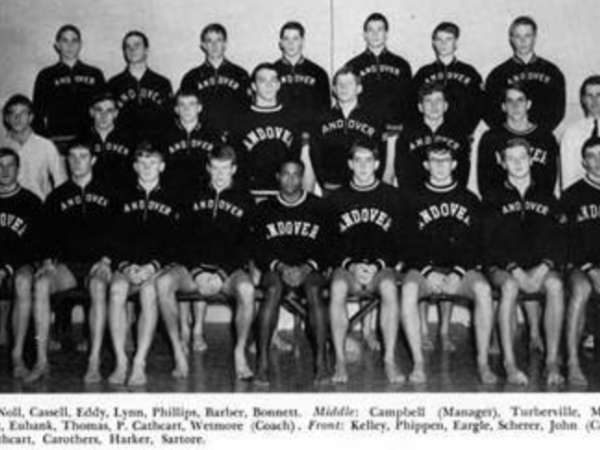 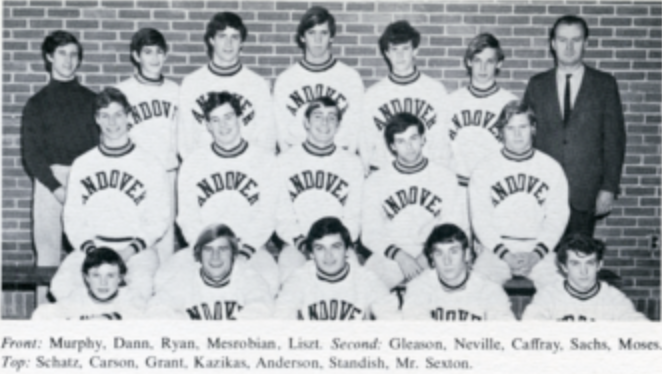 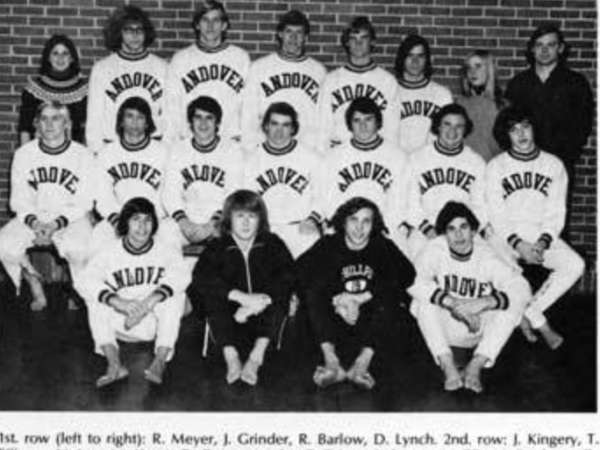 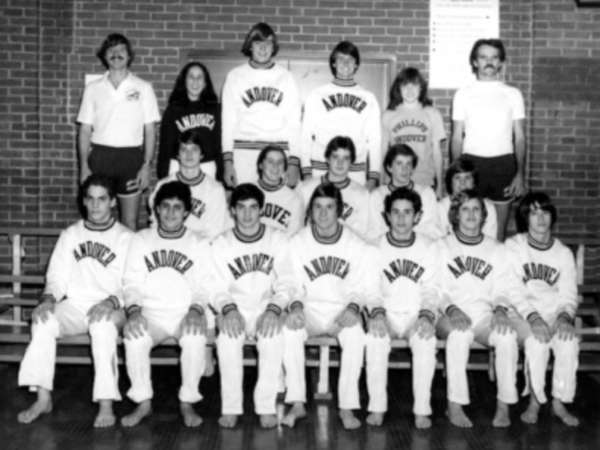 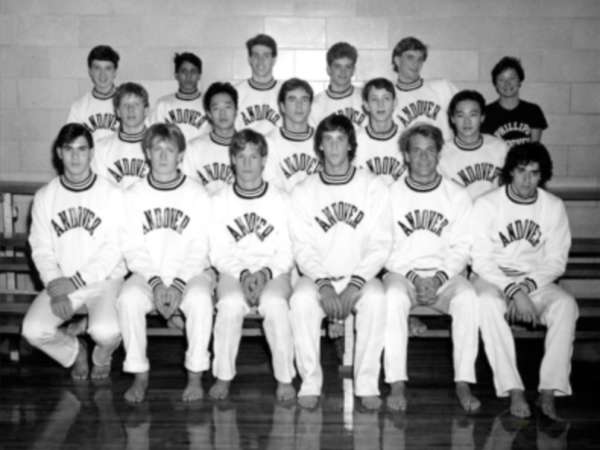