After dominant performances over Exeter in both varsity and junior varsity contests on Wednesday, the A-E Weekend contests were split, with both schools claiming two victories. Here's a wrap-up of all the rivalry contests that concluded the winter regular season. 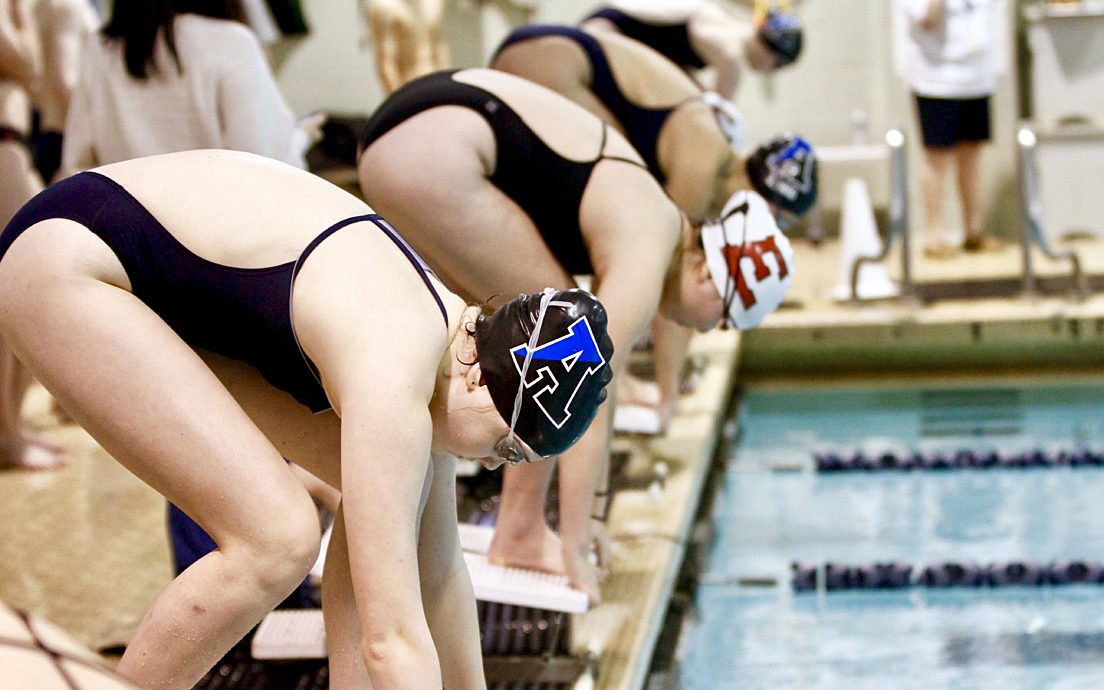 On Wednesday, Andover’s JV teams posted an 8-1 record vs. Exeter with wins by girls’ and boys’ hockey, girls’ and boys’ swimming, all the squash teams that played (boys JV1 & 2, girls JV 1), and boys’ basketball.

Boys' swimming, eleven days removed from their win at the Eastern Swimming and Diving Championships, defeated Exeter. The 102-70 win marked the fifteenth year in a row that the squad has defeated Exeter.

This weekend the team travels to the New England Prep Championships at Hotchkiss. The Andover boys are seeking their fifth straight New England Division 1 crown, and their ninth title since 2010. You can watch here.

Andover's divers will be in competition this Wednesday at Deerfield. You can watch here.

Girls' Swimming also defeated Exeter. Their 104.5-81.5 victory was the sixth year in a row that the girls’ squad has defeated Exeter and their ninth win in the past ten years.

Next up for the team is the New England Prep Championships, where they have been runners-up the past two years. The competition takes place this weekend at Hotchkiss. You can watch here.

Andover's divers will be in competition this Wednesday at Deerfield. You can watch here.

On Wednesday, boys varsity squash defeated Exeter, 7-0. They defeated the Big Red by an identical score earlier in the season.

This past weekend the team traveled to the New England Prep Tournament and placed 8th in the elite, Class A division.

The girls also swept Exeter for the second time this year, winning both the home and away matches, 7-0.

At New Englands, the girls also competed in the top-flight, Class A division. They earned a fourth-place finish and were given the "Team Sportsmanship" award. 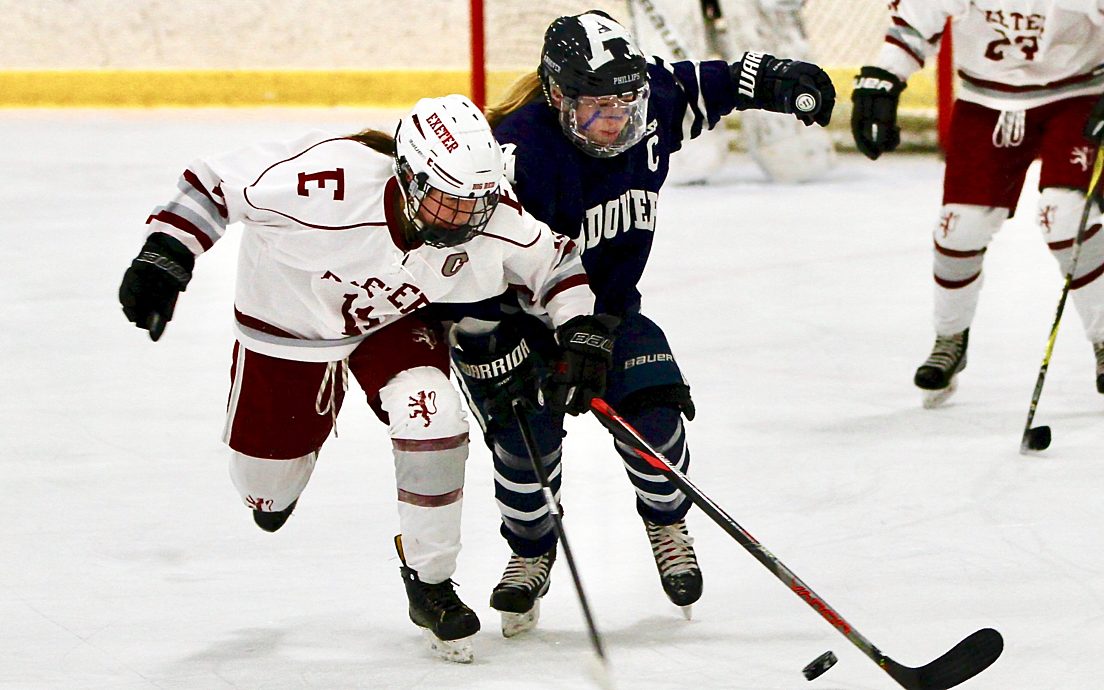 While it's doubtful that Big Blue needed extra motivation beyond rivalry bragging rights, a bid to the Elite 8 Tournament was potentially at stake Andover as well.

They certainly looked like a team inspired, scoring off a power-play in the game's opening thirty seconds. On the offensive side, Andover dominated possession, and defensively they severely limited Exeter's scoring chances in what was a very physical contest. A bevy of players spent time in the penalty box.

Andover added another goal in the second period, and two more in the third, to earn a 4-0 win.

The victory was an excellent addition to their post-season application, and the team was awarded the sixth seed in the 2020 NEPSAC Girls' Ice Hockey Tournament Chuck Vernon (Elite) Bracket, a.k.a. the "Elite 8". They play at third-seeded BB&N this Wednesday, 3 p.m.

UPDATE: GV Hockey has advanced to the NEPSAC semifinals and will host Loomis Chaffee this Saturday at 3 p.m. in the Elite Eight Semifinals. The game will be live-streamed. 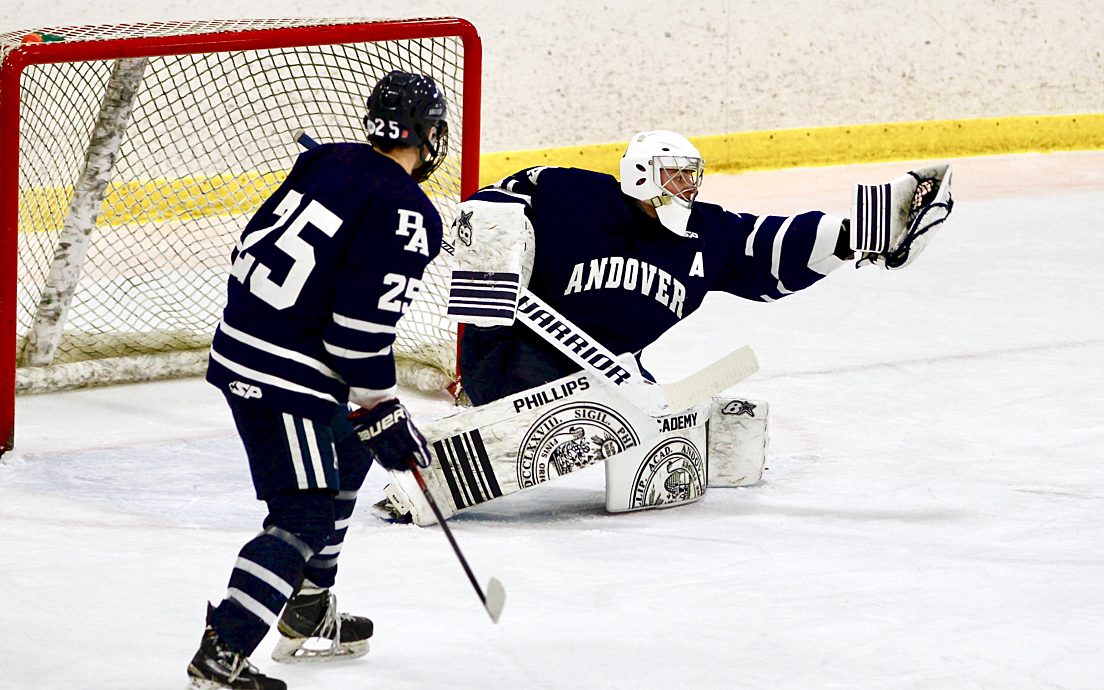 For the past several years this game has often been the closest contest of the winter rivalry weekend, and this season was no different.

Despite remaining scoreless until the game's final minute, the frenetic action, up and down the ice, combined with the enthusiasm of the two school's fans, made for another frozen classic. Both goalkeepers were outstanding, displaying several highlight saves, particularly in the third period.

Andover's goalie, Charlie Archer ’20, a four-year letterman, was superb, stopping 38 of Exeter's 39 shots. The only shot that slipped past the Big Blue netminder was with a mere 41 seconds left on the clock, giving Exeter the 1-0 win. 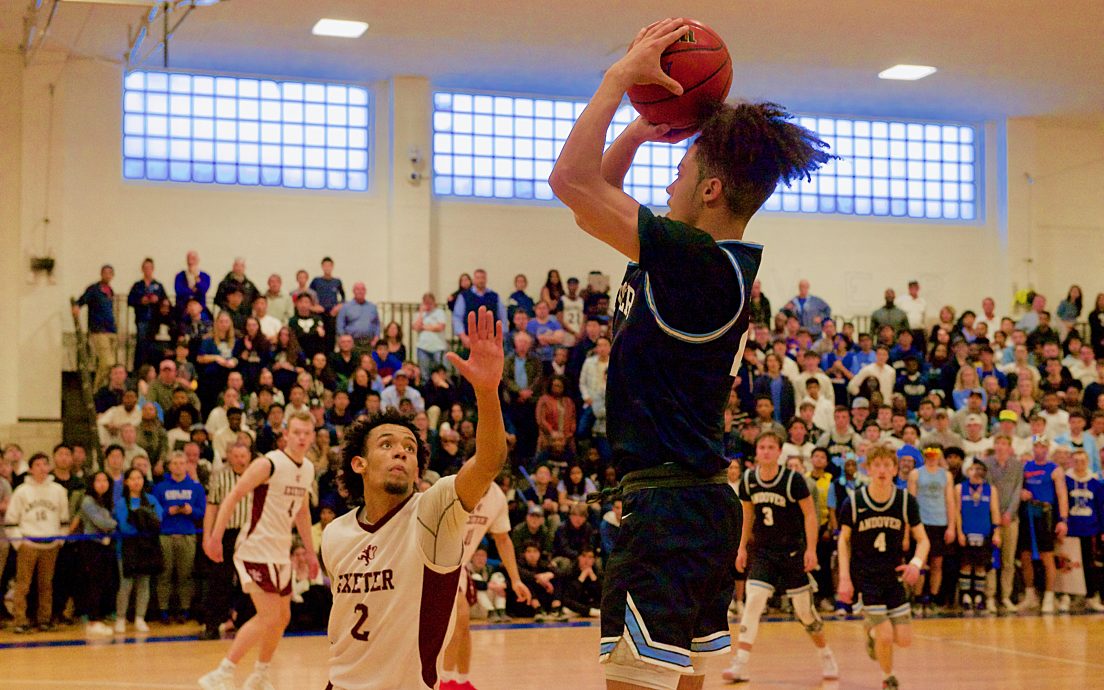 The team had already compiled a strong enough season to assure them of a berth in the Class A Tournament, but higher tourney seeding, in addition to school pride, was at stake.

Andover struggled from the field in the first half, depending on their defense to keep them within striking distance. Big Blue eventually found their range, erasing a 10 point deficit in the closing minutes of regulation. The thrilling comeback was completed by a high arching runner by Dallion Johnson '20, which tied the score at 52-52, and sent the game into overtime. Andover again had to come from behind, and again Johnson tied the game, this time off a beautifully executed inbounds play, producing the small opening he needed to sink a three-pointer from the corner with only twenty seconds remaining.

Exeter missed a three-pointer in the overtime period's closing seconds, but in the fight for the rebound, the ball was inadvertently thrown back to an Exeter player who tossed it in as the buzzer sounded. 64-62 Exeter win.

As fate (or the NEPSAC tournament committee) would have it, the two teams square off again this Wednesday as 6th seeded Andover travels to play 3rd seeded Exeter at 5:15 p.m.

UPDATE: BV Basketball has advanced to the NEPSAC semifinals and will play second-seeded Hotchkiss on Saturday at 2 p.m. at Watkinson School in Hartford, CT. 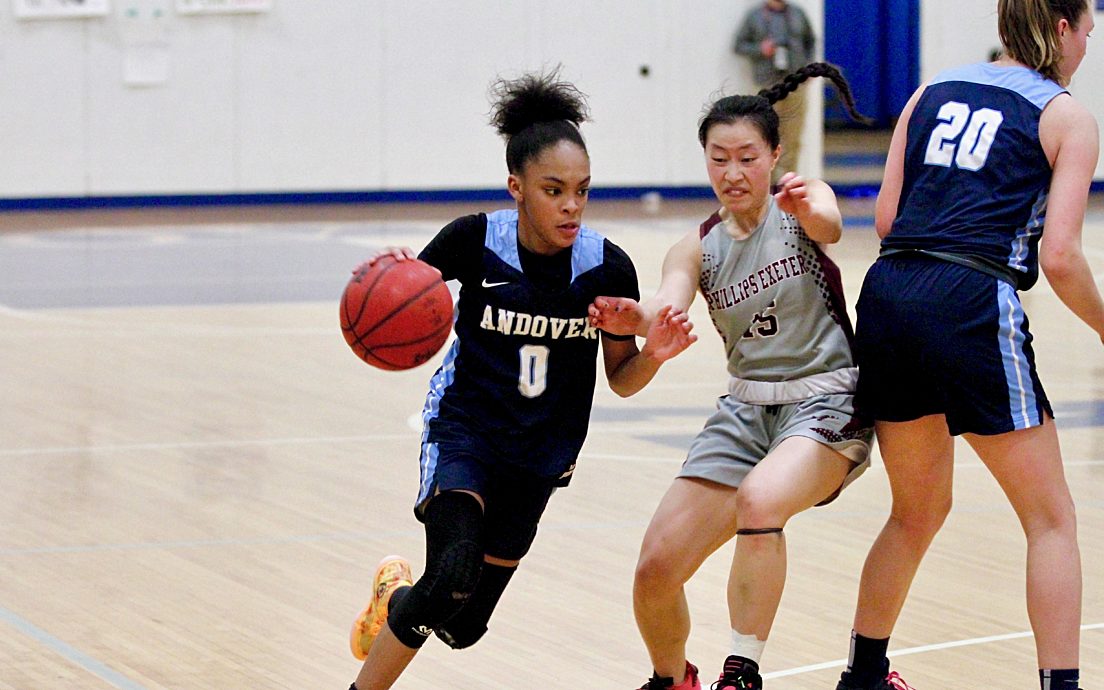 Andover entered the rivalry contest as a team on the tournament bubble. They had already soundly defeated Exeter earlier in the season, but the Big Red proved much more stubborn this time.

Big Blue maintained a lead for most of the game and pushed ahead by ten points in the fourth quarter. Exeter chipped away at the lead and, after a converting a steal into a jumper, took their first lead of the half with just under a minute left on the clock. With Exeter now up, 51-50, Andover responded, as Kennedy Herndon '23 drove hard to basket and drew a foul. Herndon calmly sank both free throws to put the home team back in the lead, 52-51, with 26 seconds remaining.

Exeter did not get the shot they wanted on their last possession, missing the rim on a three-point attempt. The ball traveled out of bounds, resulting in an Andover possession with 2.4 seconds remaining. Hannah McGrath ’20 threw a beautiful inbounds pass to Herndon, who was fouled once again, and once again she made both free throws. The foul shots ended the game, a 54-51 victory for Andover.

The win bounced Big Blue off of the bubble, and into the tournament. Andover is the #7 seed and travels to play #2 Tilton on Wednesday at 3:30 P.M. Watch the game live.

On To The Postseason. Go Big Blue!

Three of the weekend’s games were decided with less than a minute remaining, but there’s no time to catch our breath. After experiencing two buzzer-beating defeats in one day, the Andover faithful could take solace in the fact that three Big Blue teams had earned post-season tournament berths, compared to Exeter's one.

Andover Girls’ Hockey, Boys’ Basketball, and Girls’ Basketball will all be in quarterfinal action on Wednesday, March 4. Boys’ and Girls’ Swimming & Diving also have high hopes for continued post-season success this week.