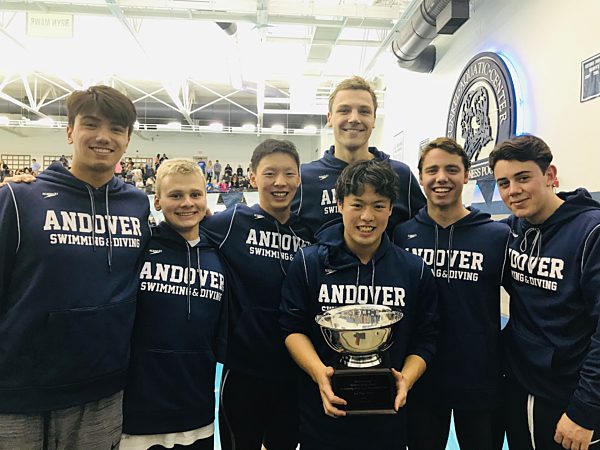 The juggernaut that is Andover boys' swimming and diving rolls on, with the latest podium stop a familiar one in Pennsylvania. This past weekend, the Big Blue squad took home their second straight title from the Eastern Interscholastic Swimming & Diving Championship held at Franklin and Marshall's Kunkel Aquatic Center in Lancaster, Pennsylvania.

Also of special note was the trophy brought home by both Andover's boys and girls squads for earning the combined team title which is awarded to the school with the most total points. The Andover girls finished fourth overall out of twenty-six total teams and were the highest placing girls team from New England.

The competition, which began in 1935, bills itself as, "The premier prep school swimming & diving meet in the country", and with good reason. Andover's head coach, David Fox confirmed that the fiercely contested meet is, "Considered among the most prestigious high-school meets in the nation, Easterns has seen more national records established at it than any other."

Andover's win last year marked the first time that a team from New England had won the meet, and their repeat feat is particularly impressive considering only one other team has won the championship in consecutive years in over a decade.

Coach Fox summarized the team's weekend at Easterns, "Over the two-day meet, Andover Swimmers and Divers achieved 37 best-ever performances, for a remarkable 88% success rate. 19 out of 21 members of the team placed among the top 24 in at least one event, earning points, and the other two just missed out. Andover Swimmers surpassed an All-American standard 24 different times, and they tied or surpassed a record 23 different times."

While there were several highlights from the competition (read a recap with results here), the breaking of near thirty year old meet record stands out. Fox explains, "In 1991, a Bolles squad, led by four-time Olympic medalist and four-time Olympian, Gustavo Borges, established a National and Eastern Record in the 400 Free Relay of 2:59.98. While a handful of schools have surpassed that National Record in the last 29 years, no Eastern School has, although in 2013, a relay from Peddie tied the record. For the past few years, Andover has had the goal of going under 3:00 and breaking that record. And in the last event of this year’s meet, Marcus Lee ’21, Arnold Su ’20, Sam Donchi ’20, and Max Hunger ’20 finally did it: 2:59.81." (see video below).

The continued success of Andover Boys' Swimming & Diving isn't a surprise to those who follow national prep swimming, as last year Andover represented the United States at the World Championships in Rio. Based on Andover’s performance nationally during the 2018 season, the Amateur Athletic Union selected Andover to be the United States’ sole entry at World’s, where each nation is represented by only one high school team. The program has won four straight New England Prep Class A titles, and taken home the New England crown eight of the last ten years.