Despite losing a year of high school competition to injury, Marsiol Nugent ’20 has accomplished more as an athlete in the last few years than many would hope to in a career.

In a graduating class that boasts multiple All-Americans and several other athletes that have garnered national acclaim and success this year, Nugent has still stood out. She was a fierce competitor for Phillips Academy field hockey and contributed to two of their recent New England titles during her time at Andover. On the wrestling mat, she was selected as team co-captain, was awarded All-American honors six times, won a Super 32 Tournament National title in 2018, and captured both a New England and National Prep title this year.

At New Englands, Nugent scored three first-period pins to claim the title and was voted Outstanding Wrestler of the girls’ division by the coaches. At Nationals, she duplicated the feat, again pinning all three of her opponents in the first period of their matches.

The titles were as historic as they were impressive. Both tournaments held their first-ever girls’ divisions.

Nugent’s national title was the second ever for a Big Blue wrestler. Daniel Shvartsman ’02 took home the crown 18 years ago. Shvartsman went on to earn Academic All-American honors at Duke University.

This year Nugent was also the Massachusetts recipient of Tricia Saunders High School Excellence Award which, "recognizes and celebrates the nation’s most outstanding high school senior female wrestlers for their excellence in wrestling, scholastic achievement, citizenship, and community service" and was awarded the Jim Peckham Scholarship for, "Massachusetts high school wrestlers who plan to wrestle in college and who have demonstrated excellence in wrestling, academics, and personal character."

Most recently at Andover, her athletic prowess was formally recognized last week during the school's Senior Athletic Tribute program when she received one of Phillips Academy's two Press Club Awards. The Press Club Award is presented annually to two athletes, "who have shown through their performances in competition that they have been the most capable athletes of the past year".

In presenting the award to Nugent during the virtual gathering, head Wrestling coach Kassie Archamabult ’06 thanked her wrestler for all she had done for the program. The admiration and appreciation are certainly mutual. Nugent has remarked that being able to have Archambault as a coach was a major factor in her decision to come to Andover. Although their gender has received a great deal of press coverage, their coach-to-athlete dynamic transcends the categorization and is a familiar one in athletic success stories. As a wrestler during her time at Andover, Archambault built a reputation as a focused competitor who despised losing and was willing to put in the work necessary to improve. Nugent shares these characteristics and Archambault's ability to relate has meant that support and encouragement have come in the right ways at the right times, as illustrated in a Boston Globe piece on Archambault and the Phillips Academy wrestling program that was published prior to the national championships:

Recovering from hamstring replacement surgery for a torn anterior cruciate ligament, Nugent sat at home and tried her best to forget about missing her national competitions that week. But, sure enough, Archambault knocked on her door with a gift basket in hand. “To have my coach sitting with me, and telling me that I’d come back for this and that I wasn’t alone, was a really special for me,” said Nugent, now a senior co-captain. “She knows that we have this end goal of winning a national title at the end of the year, and she always helps me stay focused on that. That way, I don’t get down on myself.” 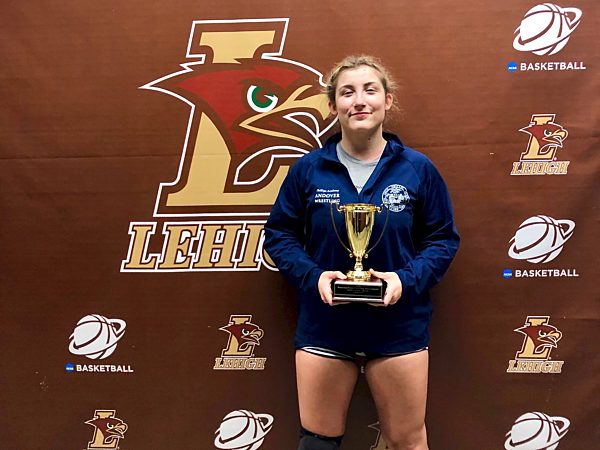 Nugent’s commitment to wrestling has extended beyond her own training and competition as she has worked not just to promote the sport, but specifically to encourage more young women to get involved and to help publicize the accomplishments of fellow female wrestlers. She mentors other wrestlers through a program in Lowell, MA, has pushed the New England Independent School Wrestling Association to increase the number of opportunities for female athletes and directs the organization, New England Women's Wrestling.

Nugent's success in and support for the sport has earned her the admiration of an alum, Kyra Tirana Barry ’83. Tirana Barry serves as Team Leader for the US Women’s Olympic Wrestling Team and through her leadership in such non-profit organizations as Beat the Streets stands as one of the foremost advocates for women's wrestling. Tirana Barry presented this year's Press Club Award to Nugent via video (watch here). 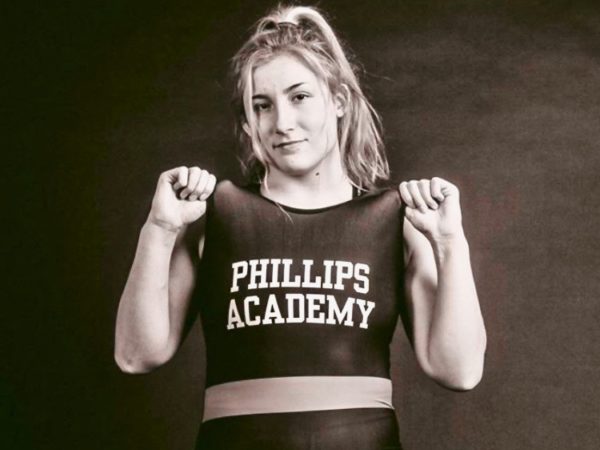 Just prior to the closing of campus due to the coronavirus, we checked-in with Nugent to ask her about her time at Andover and her future:

You were out last year with a knee injury that required surgery. What was the recovery and rehab process like, and when did you feel as if you were back at full strength?

Following my ACL reconstruction surgery, it took me a couple of weeks to be up and moving again. When I was capable of walking and driving I started intensive physical therapy with Jeff Kamuda at Optima in Salem, NH. I would do almost four hours of pt with him twice a week at his office and the other days I would follow the same routine from either my house, the Andover training room, or the gym. I tried wrestling noncontact in June. This meant putting my shoes on and just completing a stance in motion drills by myself on the mat. In July, I coached for the New England national team and was able to do most of the workouts with them that did not involve my right knee. In August I full range of motion back in my knee and started practicing at my club again. I was really out of shape and was very nervous about retearing my ACL for the entire month of Septemeber, but I pushed through it and competed in my first tournament in New York on September 28th. I ended up pinning the #2 girl in the country at 138lbs during my second match back so that gave me a little bit of confidence as I started prepping for the high school season. My knee still flares up at times and I have to wear a knee pad on my right knee because it is still very sensitive and I cannot shoot on it. I switched my lead leg to avoid shooting to my right knee which has changed my style a little bit. I currently feel very good physically and mentally about my wrestling.

Before the injury, you had quite a bit of success on the mat, including strong performances at the Fargo Junior Cadet Nationals, Folkstyle Nationals, and a championship at the Super 32 Tournament. What were the biggest lessons you learned from your prior wins and losses that contributed to your success at the National Prep Tournament?

The biggest lesson that I have learned in the sport is to never stop wrestling. Even if I am losing a match, I need to keep wrestling and scoring points for the full six minutes. I have gotten to a point where I am confident enough in my ability that I feel as though I can score on anybody and just need to keep wrestling until the final whistle. My club coaches have pushed me so hard throughout the fall and winter that I know I am physically capable of winning any match and I just need to go out and execute.

Wasn’t the Super 32 Tournament right in the middle of field hockey season? What was that like? How have you balanced wrestling on a national level with being a multi-sport athlete here at Andover?

It was definitely a bit of a struggle. Most nights I would play field hockey from 3-5, grab a Nutrigrain bar, get in my car and drive to Lowell where I would practice from 7-9. I did not sleep a lot in the fall and I was really tired most of the time if I am being honest. I would start my homework at around ten o'clock and head to bed by twelve on a good day. These late nights just motivated me before every tournament. I knew I was giving my sport and my academics as much as I could. I had to dedicate all my free time to homework, wrestling practices, or travel which isn't ideal but it provided me with really intense tunnel vision that propelled me in tough matches.

Tell us about wrestling this year, and how it compares to your experience with Phillips Academy Field Hockey.

Phillips Academy wrestling and field hockey are incredibly different. The wrestling team for me was a lot more independent. We compete as a team but have individual results that are apparent throughout the postseason. My little brother (Colin Nugent ’23, New England Prep Division 1 champion at 126 lbs) and I push each other through extra workouts, strict diets, and practices. My partnership with my little brother is my Andover wrestling experience. I have only had one year with him, but I think we both developed as athletes both mentally and physically by getting on the mat together every day. We would do Sunday morning workouts the day after meets and trips to the gym after practices on weeknights. We maintained a certain tunnel vision that is hard to find in a lot of athletes and we approached our season very intensely but it definitely paid off.

PAFH has always been a group effort. It is more of a family dynamic in which everyone carries the same goals and intensity. It's also full of year-round competitors which we don't see with Andover wrestling so the skill level is different.

What other competitions are coming up for you this year?*

I will also be coaching women's freestyle for youth wrestlers in New England throughout the spring and summer at my club, Doughgirls in Lowell, MA.

*We checked back in with Marisol after Andover's campus was closed early this spring to find out how she was adjusting to training during the pandemic:

All of my upcoming tournaments such as folkstyle nationals, world team trials, and northeast regionals have been postponed. I’ve been using the quarantine to try and heal my body from a lot of small tweaks that I had over the season. I haven’t been able to wrestle too much but I have been doing a lot of running and light full-body workouts.

My coaches have me running 12-15 miles a week. It’s hard for me because of the weather. When it rains my knee swells up a lot from ACL reconstruction surgery a year ago.

What are your wrestling plans post-Andover?

I will be enrolling at Lehigh University in Bethlehem, PA where I will continue to train with the regional training center on campus. I will wrestle for the Lehigh Valley Wrestling Club with some senior-level athletes who are on the Olympic circuit and train for Paris 2024.