Graber is often a feature presenter at national and regional coaching conventions and clinics, including the World Baseball Coaches Convention at Mohegan Sun Resort & Casino in Uncasville, Connecticut and the Massachusetts Baseball Coaches Association Annual Clinic. He was also named one of the most influential baseball​​ people in all of New England in the ​November-December 2018 issue of The New England Baseball Journal.​ 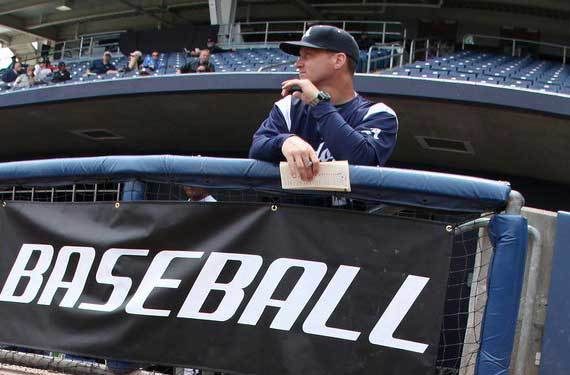 As a college player, Graber transferred from Division I Winthrop University to The College of Saint Rose in his hometown of Albany, N.Y., where he twice earned first-team all-conference honors and captained the Golden Knights to an NCAA Division II Regional berth. His ensuing playing career included stops in Australia, Minnesota, and upstate New York, batting .311 as a middle infielder for the Prairie League’s Southern Minnesota Stars in his best professional season. Graber then managed in pro baseball, guiding Southern Minnesota to a 48-24 record and earning league Manager of the Year honors with a roster that included former Major Leaguers Greg Olsen and Juan Buerenguer, before hiring on to manage the Adirondack Lumberjacks in the Northern League of Professional Baseball.​​

He segued to the college ranks shortly thereafter, and his career in collegiate athletics administration and coaching has included stops at Lassen College (Susanville, Calif.), Riverland Community College (Austin, Minn.), the University of West Alabama (Livingston, Ala.), and most recently, Amherst College (Amherst, Mass.), where he coached alongside American Baseball Coaches Association Hall of Famer Bill Thurston and also served as the college's director of alumni and parent programs. All the while, Graber spent summers managing the Saratoga Phillies of the New York Collegiate Baseball League and the Electric City Giants of the Mountains Collegiate Baseball League (MCBL), earning MCBL Coach of the Year honors. Graber coached a slew of future major leaguers during his time in college summer leagues, including American League All-Star J.D. Martinez of the Boston Red Sox; Mike Fiers, who pitched a no-hitter for the Houston Astros in 2015 and another for the Oakland A's in 2019; and St. Louis Cardinals All-Star Miles Mikolas.

Although now entrenched in the high school game, Graber continues his involvement in professional baseball as an associate scout for the New York Yankees and joins the organization’s staff each summer for a number of high-profile showcase events, including the Area Code Games and Summer Rivalry Classic, from which scores of players are selected in the annual Major League Baseball amateur draft.

Graber was inducted into the Schenectady, New York Baseball Club Hall of Fame in 1994; The College of Saint Rose Athletics Hall of Fame (along with his 1990 team that advanced to the NAIA World Series) in 2014; and the Amsterdam Mohawks Hall of Fame in 2016 in recognition of a trio of all-star seasons (1988, 1989, and 1990) playing in the New York Collegiate Baseball League.

In addition to his duties on the diamond, Graber serves as Andover’s senior associate director of admission, complementary house counselor in upperclass boys' dorm Foxcroft Hall, and ​academic advisor to a group of ​ninth​ grade boys. Graber earned a master's degree in education with a concentration in English at the University of Massachusetts Amherst. He lives on campus with his wife, Tina, and their three children—Katie, Kyle, and Kelly.