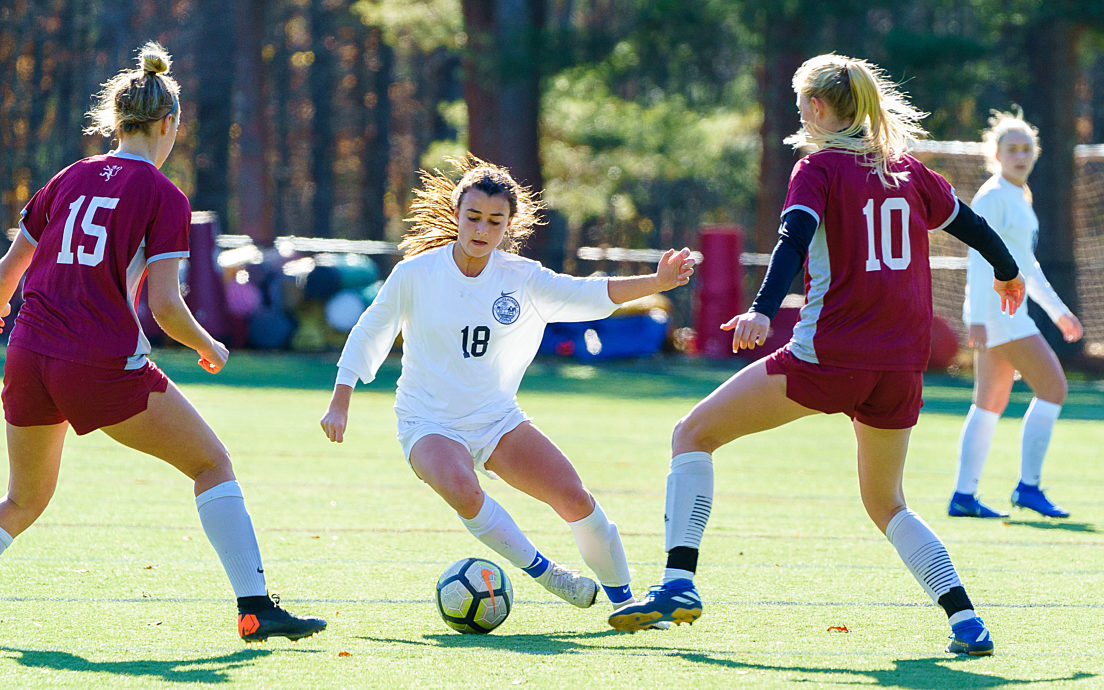 The day at Exeter began with a closely contested girls’ soccer match. The favored Andover squad was looking to shake off some sub-par performances in previous years at Exeter. With the first half ending with both teams scoreless, Andover seemed more focused in the second half, riding some great fan support, and dictating the pace of play.

At the 33:16 mark in the second half, the Big Blue finally converted. Co-Captain Rachel Chang ’20 sent a masterfully executed free-kick, from over 30 yards out, whipping into the box, directly onto the foot of Mary Stuart Kerrigan ’22. Kerrigan synched her run with the kick perfectly, earning a step on her Exeter defender, providing her space to send a volley lower left, past the reach of the diving Big Red keeper. Andover’s defense held Exeter scoreless for the remainder of the match. The 1-0 Andover win pushed their regular season record to 12-2-3. The team was given the seventh seed in the New England tourney and will travel to face #2 BB&N on Wednesday.

Volleyball had already put together another strong season, bringing a 12-3 record with them to Exeter. However, one of those loses had been just over three weeks prior, 1-3, to and undefeated Exeter side. Unfortunately, Saturday’s results weren’t much different as Exeter played outstanding volleyball, winning 3-0. Outside of one stretch in the second set, Big Blue did play well, rising to the boisterous level of the Andover crowd which filled half of Exeter’s gymnasium.

Andover Volleyball enters the New England tournament as the fourth seed and hosts Deerfield on Wednesday. Please check our athletic schedule for the game time and live-streaming information. 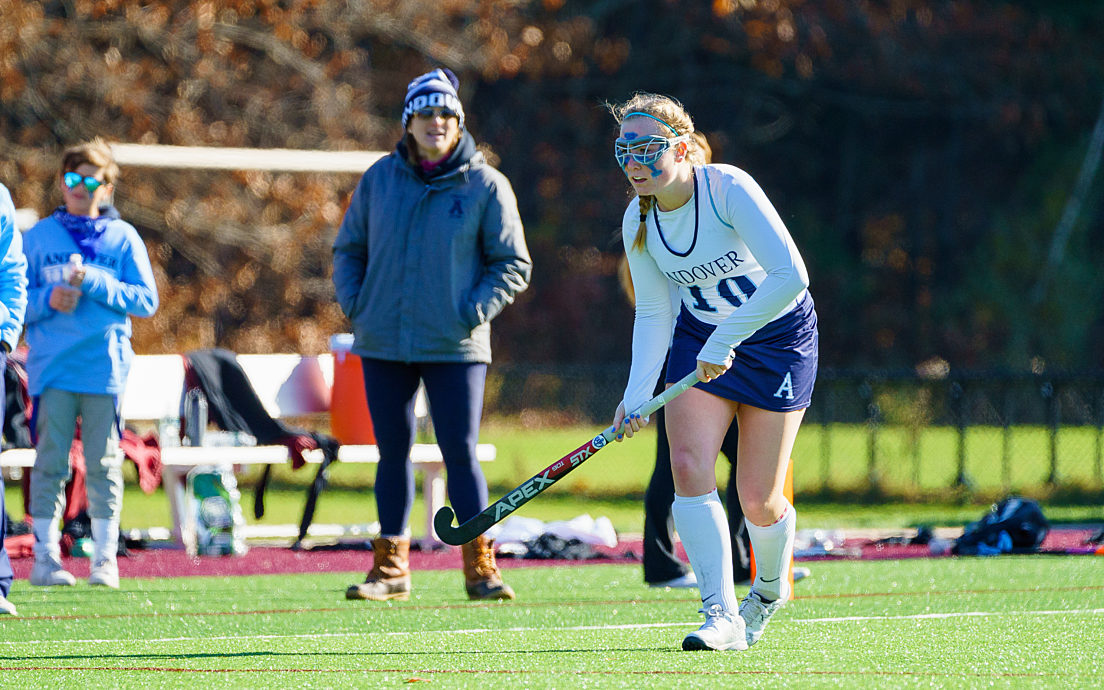 Defending New England champions Andover field hockey arrived as heavy favorites. Big Blue started strong, and focused, scoring three unanswered goals in the game’s first two minutes. Those three tallies proved to be all Andover needed as its defense continued the strong play which they have exhibited all season long, thwarting several Exeter corners in the second half. Andover was able to go deep into its bench on their way to the shutout win.

Big Blue takes a 13-3 record into the tournament. As the 6th seed, Andover travels to face #3 Tabor on Wednesday. The game is a rematch of an intense 4-5 overtime loss for Andover back on September 28. 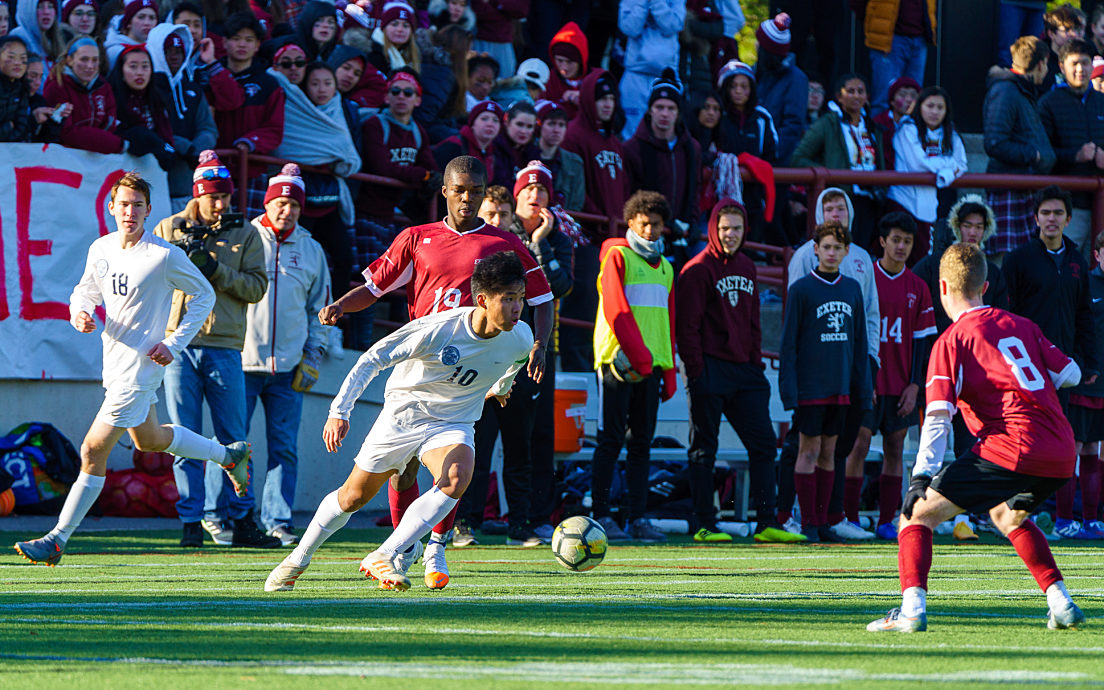 Boys’ soccer has had an up and down season but has had flashes of strong play, proving they could potentially play with anyone in New England. Andover was facing an Exeter side that needed a win to solidify their tournament selection. The game was physical from the start with the large crowds of both schools adding to the intensity. Andover’s defense seemed particularly intent on playing the role of spoiler to Exeter’s postseason hopes, leaving little room for Exeter to breakthrough. While there were few scoring chances for Andover in the first half, captain David Wang ’20 just needed one as he threaded a free kick from 20 yards out past the Big Red goalie. Later in the half, in one of the few defensive miscues of the day, Andover turned the ball over in its defensive third, leading to an Exeter goal. It was Exeter’s only tally of the day though as the visiting side held strong.

The second half saw the crowds and the game’s intensity grow. Although Andover produced two good chances in the second half, both off corners, Exeter was far more dangerous offensively. Big Blue’s defense stood up to the pressure, and the 1-1 tie seemingly knocked the Big Red out of a New England tournament selection. Andover finished the season with a record of 5-8-2. 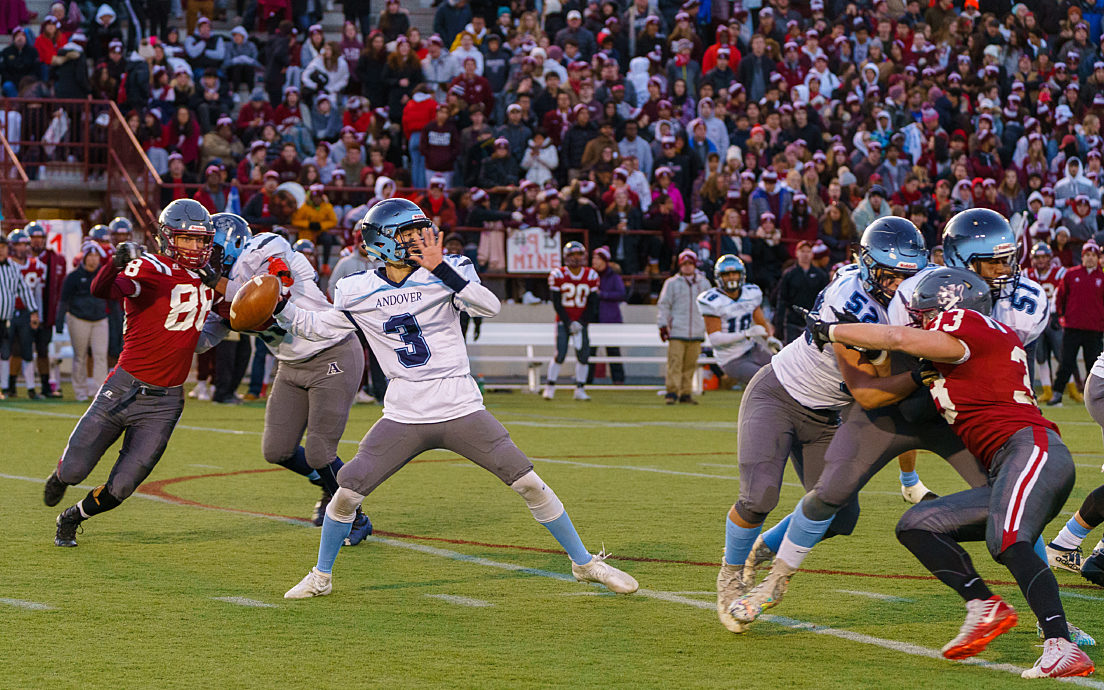 While neither of the school’s football teams had produced particularly strong seasons, you’d never be able to tell from the electric atmosphere at Exeter’s stadium. Defying the frigid temperature, the crowds and teams produced a level of excitement that transcended win-loss records, and once again proved that this prep rivalry is the nation’s best.

Andover, on their first possession, opened the scoring off of a gutsy call by first-year coach, Trey Brown ’12 on fourth down and 8 yards to go from the edge of the red zone. Quarterback Julio Dahl ’22 connected with Hunter Lane ’20 for the first six points off the day, and the extra point put Big Blue up, 7-0.

The remainder of the half contained some frenetic play, and turnovers by both schools. Big Blue’s defense looked strong, pressuring the Big Red quarterback, and stopping an Exeter attempt on fourth and short from Andover’s five-yard line late in the half.

An Exeter touchdown and extra point with eight minutes remaining in the third quarter tied the game, 7-7. Andover answered with 7:47 left in the fourth quarter as Lane pulled in another pass for a touchdown. The converted extra point put Andover up, 14-7. The Exeter offense responded, twice pushing into Andover territory, only to be stopped twice, including by an interception deep in Andover territory with just over four minutes remaining. Andover was unable to run out the clock on their subsequent possession, giving the Big Red one more chance. On a desperation fourth-down attempt with less than two minutes on the clock, the home team beautifully executed a half-back option pass, completing a heave to the two-yard line. The Andover defense stuffed two goal-line attempts, but Exeter pushed through on third down, scoring with just 16 seconds remaining. The ensuing touchdown celebration earned an Exeter player an unsportsmanlike conduct penalty, pushing the extra point attempt back 15 yards. Exeter still opted to kick, but the attempt went far left, leaving Andover’s recovery of an onside kick all that remained before a kneel down sealed it.

The 14-13 victory was the seventh in a row for Andover and was the first rivalry win for new head coach, Trey Brown ’12 who took over for the retired Leon Modeste.

Away from Exeter, boys’ water polo, fell, 7-8 to Suffield in the play-in game at the “Liquid Four”, hosted by the Brunswick School.

No strangers to the post-season podium, Andover’s cross-country teams both placed again at the New England Championships.

Full results from the NEPSTA Championships: