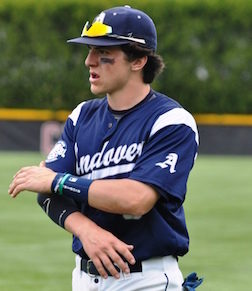 "After losing in the finals of last year's Central New England Prep School Baseball League-Thomas Blackburn Championship Tournament, PA made a unified promise to not let it happen for a second time against Worcester Academy. With the sting of last year's defeat still tucked away in the minds, the second-seeded Big Blue were hell-bent on taking down the Highlanders any way possible this time around. With nothing decided after the regulated seven innings, PAYTON JANCSY (pictured) broke a 1-1 deadlock by sending an Alex Brickman first pitch fastball deep over the left-field fence and give PA a 2-1 victory Saturday evening at Harvard University's O'Donnell Field."