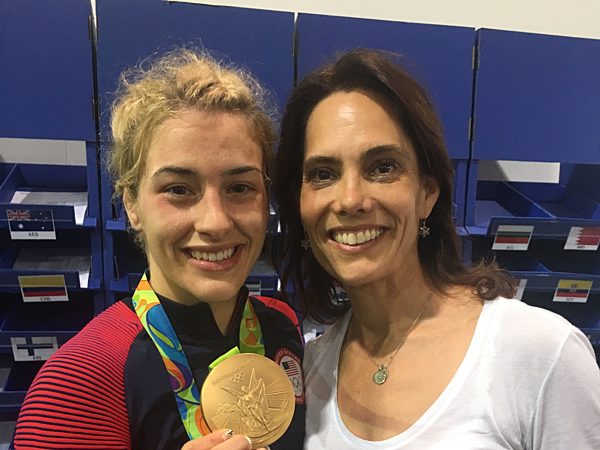 How does someone with no personal wrestling experience become team leader for the 2016 USA Wrestling women’s team and be named USA Wrestling’s Woman of the Year? If you ask Kyra Barry ’83, she will say it has to do with self-awareness and gumption.

“Throughout my career, I have always tried to take advantage of what is in front of me,” Barry says, adding that much of this learning has come from sports.

As board president of Beat the Streets, a nonprofit organization in New York City, Barry works to improve the lives and potential of youth through wrestling. It’s a job she finds deeply fulfilling.

“If you look at youth development, a lot of the metrics are based on academic markers. But now there is a lot of emphasis on noncognitive learning, and skills like perseverance, grit, and discipline,” Barry says. “Some kids will get that from the classroom, but others will find it on the playing field.”

As a three-sport athlete at Andover (soccer, squash, and softball), this was certainly true for Barry. Though she graduated before PA’s coed wrestling program started, it was at Andover that she was introduced to the sport by her close friend and wrestler Josh Hubbard ’83. Barry attended numerous matches at Andover and at Columbia College, where her boyfriend (now husband, David) was a wrestler.

After graduating from Columbia with a degree in urban studies and working in various transportation policy positions, Barry took time off to raise a family, but wrestling was always in the background.

When her children were in school and began to participate in sports, Barry became involved in various school boards and helped develop youth soccer and wrestling programs in Hoboken, N.J. Those experiences paved the way for her to join Beat the Streets (a partner organization of USA Wrestling) in 2010 and to become team leader of USA Wrestling’s women’s team for the 2016 Summer Olympics.

Barry’s Olympic role was focused on advocacy and ensuring the athletes adhered to Olympic rules and policies. As part of the official U.S. delegation, Barry took part in all activities with the athletes; she marched in the opening ceremony and lived in the Olympic Village. To top it off, the women’s team won its first gold medal. “The Olympics were the pinnacle, said Barry. “I loved it!”

Barry’s focus now is to advocate for wrestling, especially for women and girls. She has set up committees to help increase participation and is pursuing NCAA emerging sports status. What keeps her motivated and excited? Barry has learned a lot from sports, and she wants to share that knowledge with the next generation.

“When you get out on that mat, it is one on one. You have a keen sense of accomplishment and sense of self because you are the only one,” says Barry. “I think the skills acquired through wrestling are really important, particularly for women in the workplace as we fight for gender equity.”