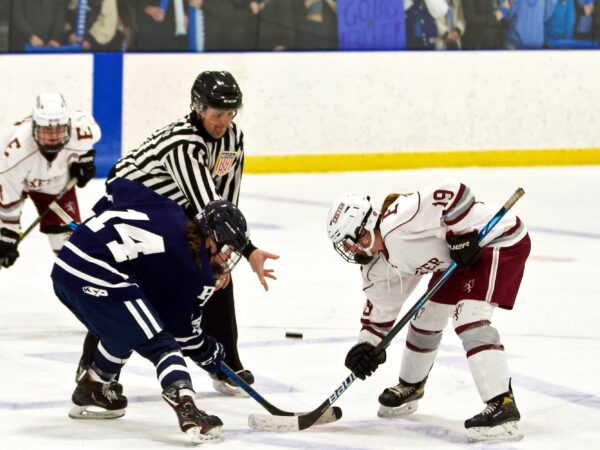 The Big Red fans that made the trip arrived and immediately matched the enthusiasm of the Andover faithful, creating an exciting atmosphere that was only heightened by all four of the day's varsity contests being closely contested.

Girls' Hockey faced off first, with the Andover side coming in as heavy favorites, their spot in the post-season's "Elite Eight" secure. It was clear that the Big Red had an upset in mind, skating hard from the moment the puck dropped at Harrison Rink. Andover seemed to be caught off guard and conceded a goal less than three minutes into play. Big Blue regained focus and answered with two goals of their own, closing out the first period ahead, 2-1. Exeter didn't fade in the second period, repeating their early first-period success by netting their second goal in the second period's opening minutes. The tie didn't last long as Andover retook the lead minutes later only to see Exeter tally another, closing out the period at three goals apiece. The third session was all Big Blue, as the home side outskated their rivals end to end, and earned two unanswered goals in the period's first three minutes for their effort. Lulu Rourke '23 (Wellesley, MA) played the hero, skating into perfect position twice to receive deft passes from her teammates and direct them into the back of the net, securing a 5-3 win. 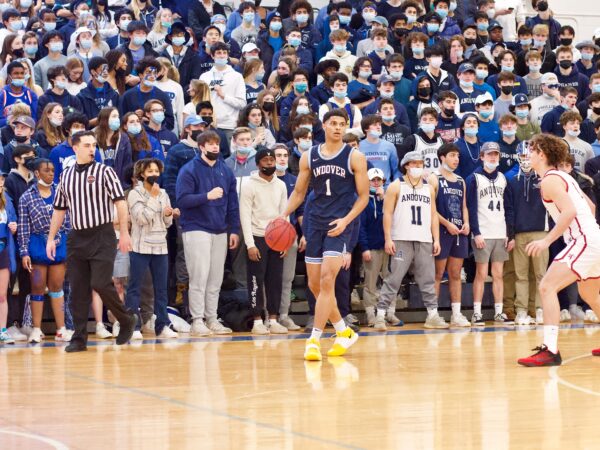 Jordan Rayford '22 in front of the home crowd.

Boys' Basketball was up next and both school's crowds matched their team's intensity from the opening tip in a packed Memorial Gym. While the rival crowds traded cheers from the stands, Exeter built a lead on the court, largely off of transition baskets from Andover's cold shooting. Andover's coach Terrel Ivory '00 credited his squad with, a "strong defensive performance that kept us in striking distance", as the half ended with Big Blue down by ten points. Ivory continued, recapping the second half, "The adjustments we made helped us come back from a ten-point deficit to lead by one point with six minutes left in the game. Jordan Rayford '22 (Washington, DC) and Diego Velez '24 (Irvington, NY) made some big shots, but in the end, Exeter made the plays necessary to secure a five-point victory (60-65). The crowd for both teams makes this game and environment so special."

It was back to Harrison Rink for Boys' Hockey, the penultimate clash of the day. The teams entered the game close in the league standings, and that parity was reflected on the ice. It was a tense, back and forth affair for most of the opening period until the visitors struck first, scoring the period's only goal at the eleven-minute mark. It didn't take Exeter as long to find the net again in the second period, notching their second goal just three minutes in. Big Blue bounced back as Nick Royster '22 (Charlotte, NC) finally got Andover on the board at 7:40 in the second period. The home side skated with renewed energy after the goal, but Exeter's defense matched it as the period ended, 1-2. Andover earned chances in the final period, but the Exeter goalie was outstanding, bailing out his teammates on multiple occasions. The scoreboard didn't change until the Big Red scored on an empty netter with less than a minute to play, taking a 3-1 lead. Instead of giving up, Andover continued to fight with Royster answering right off the subsequent face-off, for his second goal of the day. The scoreboard read 2-3 with 12 seconds remaining. The Big Blue won the puck again to get another chance at the tie but missed the net in the battle's final seconds. Watch game highlights here.

Before the players or fans even have a chance to catch their breath, we're doing this again! The two teams will have a rematch on Wednesday, this time at third-seeded Exeter, with sixth-seeded Andover looking for revenge in the New England Prep Martin/Earl (Large School) Tournament (bracket). 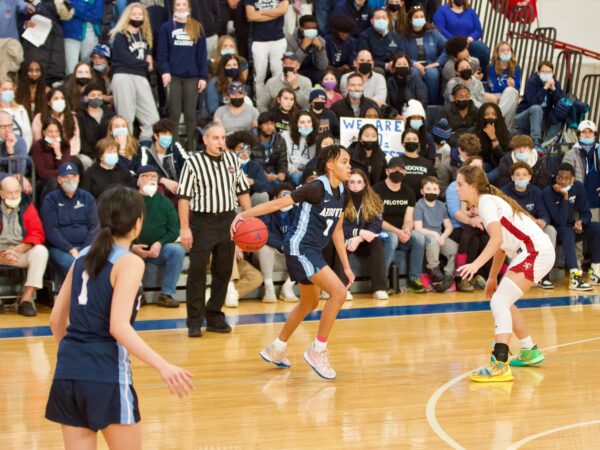 Girls' Basketball concluded the day, with Memorial Gym serving as the final stage. Andover was favored, but struggled defensively from the opening tip, allowing Exeter to keep the score close in the first half. Big Blue maintained a small lead through the third quarter, but Exeter was aggressive on the offensive end, repeatedly driving to the basket. The Big Red converted enough shots from the paint to complete their comeback as Andover went cold from the field in the game's waning minutes. Big Blue lost, 49-56 but enjoyed the support of an Andover crowd that was as large and loud as any during the day.

Andover looks to rebound on Wednesday as they are the sixth-seed in the New England Prep Class A Tournament, and travel to play third-seeded Loomis Chaffee (bracket).