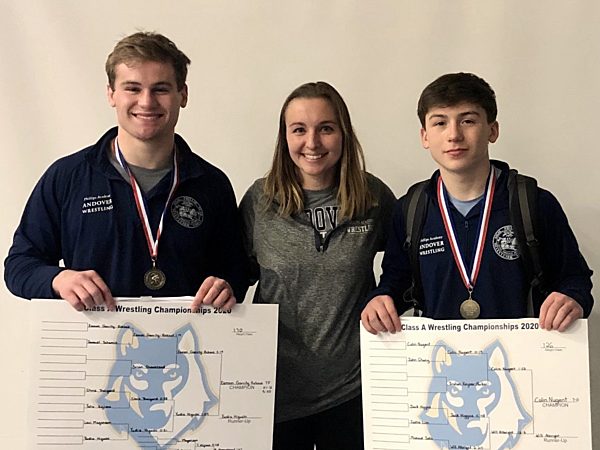 After a successful regular season, in which they posted a 10-5 record, Andover's wrestling program has moved into post-season mode this February.

Andover crowned two individual champions at the Class A league tournament at the Hyde School in Bath, ME back on February 1st. Colin Nugent ’23 went 3-0 at 126 lbs, pinning his first two opponents in the first period, and defeating his St. Paul’s opponent 7-0 in the finals. Co-captain Eamon Garrity-Rokous ’20 also won his first Class A championship at 170 lbs; he pinned his first two opponents, and tech falled his NMH opponent 27-12 in the finals.

Head Coach Kassie Archambault recapped the tourney, and looked forward, "Colin dominated his first two matches, with a first period pin in both the quarterfinals and semifinals. He had a strong finish with a 7-0 decision over his opponent in the finals. Eamon pinned his first two opponents, although both his semifinals opponent and his opponent in the finals gave him a bit of a challenge. The team placed 4th overall out of 12 teams. Our 3 seniors all ended the tournament with a win, as Eamon placed 1st, and Marisol and Thom each placed 3rd in their respective weight classes. We have a lot to work on before the New England championships, but our goal as a team is to place top 10."

The program has had some more media attention of late, with articles in the Boston Globe and Eagle-Tribune appearing this week.

This year's New England Prep Championships run from Friday, February 14th to the 15th and are being held at the Governor William A. O'Neill State Armory in Hartford, CT.