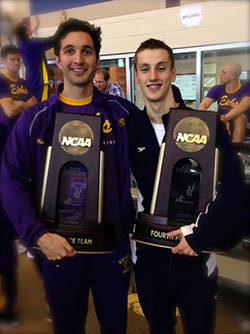 Shenandoah, TX — In the winter of 2009, Alexander Nanda ’11 and Andrew Wilson ’12 were teammates on the Andover Junior Varsity Swimming and Diving squad. In the winter of 2015, they combined to break ten NCAA Division III records at last week’s championships.

Their efforts began Wednesday morning when Wilson, a physics and applied mathematics major at Emory University, broke the NCAA Division III record in the 200 Individual Medley with a time of 1:46.25. The previous record of 1:46.97 was set in 1998. That evening, he lowered his own record to 1:46.23 to claim his first individual national championship; he won two relay championships at last year’s meet.

Thursday morning, Nanda, an English and mathematics major at Williams College, and Wilson both swam in the preliminaries on their respective 400 Medley Relays, and both relays broke the NCAA Division III record: Emory in 3:14.87 and Williams in 3:14.84.

In the evening final, Williams took a tremendous lead on the backstroke leg, but by the time Wilson was finished with his 51.27 breaststroke split, Emory had a strong lead. Williams gained a bit during the butterfly, but in the final freestyle leg, Nanda passed Emory with a 44.19 split. Both relays surpassed the morning’s record, Emory in 3:13.55, Williams in 3:13.49. This was Nanda’s first championship.

During the preliminaries of the 100 Breaststroke Friday morning, Wilson swam 52.59, breaking his own record of 53.41 from December. Following the swim, he remarked, “I have more for tonight.”

By swimming the final of the 100 Breaststroke in 51.72, Wilson became the 13th fastest performer in the history of the event. Wilson’s time would have placed 3rd at the 2014 NCAA Division I Championships, and he won his second individual title of the meet. 2nd in the event went to the defending champion in 54.11.

On Saturday morning, Wilson shattered his own Division III record in the 200 Breaststroke, a 1:57.18 from December, with a 1:54.68. On Saturday evening, he again broke his own record by swimming a 1:52.97 to win his third event. To put that in perspective against other top Division III talent, Wilson’s split at the 100 was 54.43, which would have placed 3rd in the 100 Breaststroke event—behind himself and one other swimmer—and 2nd place swam 1:58.84. Wilson’s time would have tied for 6th at the 2014 NCAA Division I Championships and places him among the top twenty performers in history.

For his performances at the meet, Andrew Wilson was named the 2015 NCAA Division III Swimmer of the Year.

“I am so happy for Alex and Andrew, who continue to experience their remarkable ascendancy we witnessed at Andover,” said David Fox, Head Coach of the Andover Boys’ Varsity Swimming and Diving Team. “At the end of his first season with us, Alex’s best time in the 100 Free was 56; as a senior, he split 47. Andrew’s best times in 9th grade were 1:09 in the 100 Breast and 2:23 in the 200 IM. By the time he graduated, he went 59 and 1:58.

“More important to me and to our program, there are no more team-oriented, diligent, and deserving guys than Alex and Andrew. Despite never having broken 46 in the 100, Alex split 44.19—the fifth fastest at the meet—on a relay when it mattered most.

“Andrew’s performances were simply astounding, particularly his Division I-quality swims in the breaststrokes,” Fox continued. “They are testament to his athleticism, focus, and work ethic as well as to the extraordinary support he receives at Emory and the Dynamo Swim Club. His time in the 100 would have stood as the American Record as recently as December 2010. I’m not sure any swimmer has ever dominated NCAAs quite like this, yet Andrew is handling it all with genuine humility and grace.”