When Andrew Wilson '12 (Bethesda, MD) finished second in the 100 Breaststroke at the U.S. Olympic Swimming Trials last night, he became the third Phillips Academy alumnus to qualify for Olympic Games in Tokyo, Japan (July 23rd - August 8th). Wilson joined Olivia Coffey '07 (Watkins Glen, NY) who made the women's eight rowing team for the United States, and Lindi Schroeder '20 (Andover, MA) who qualified as part of a duet in artistic swimming, also representing Team USA. This will be the first Olympics for all three athletes. 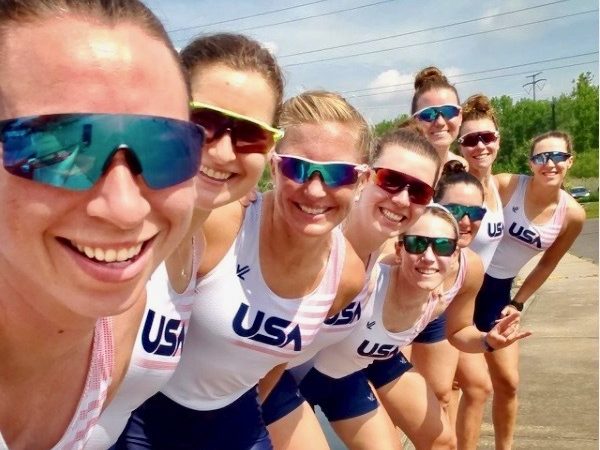 Olivia Coffey '07 (left) in a selfie with her teammates.

Olivia Coffey '07, an alternate for the 2016 Olympics in Rio, has already had an incredible rowing career, including three world championships. She didn't even compete in the sport prior to arriving at Andover, known primarily as a prep ice hockey phenom upon matriculating (read a great 2018 profile of Coffey in The Phillipian). After a stellar multi-sport (soccer, ice hockey, and crew) career at Andover, she went on to earn All-American honors rowing at Harvard and joined the Under-23 National Team while still an undergrad, 2009-11. Coffey rowed for the Senior National Team 2013-15, and 2018-19. She won the gold medal in the quad sculls at the 2015 World Rowing Championships and earned gold again in the eight and the four at the 2015 World Rowing Cup II. Her recent rowing highlights include a third-place finish in the eight at the 2019 World Rowing Championships, and winning silver in the eight at the 2019 World Rowing Cup II. She also rowed in The Boat Race in 2018, helping Cambridge, where she was completing her MBA, defeat rival Oxford in one of the sport's most famous showcases. Her older sisters, Laurie '95 and Claire '99 also went to Andover, and her father rowed to a silver in the men's pair at the 1976 Olympics.

Andrew Wilson '12 began his Andover swimming career on the JV squad, something Phillips Academy Coach David Fox mentioned when introducing Wilson during last year's (online) senior athletic awards, during which Wilson presented the Press Club Award to Big Blue swimmer Sam Donchi '20. “Andrew Wilson began his Andover career as a member of the JV swimming team and is now a World champion. In between, he became the most successful swimmer in the history of NCAA Division III, and he had the fastest 100-meter Breaststroke time of any American in both 2018 and 2019. With the U. S. Olympic Trials postponed for a year, Andrew will continue his career and is delaying his acceptance to a master’s program in Math Modeling and Computational Science at Oxford University.” The postponed U.S. Olympic Trials that Fox mentioned are obviously now underway in Omaha, Nebraska (watch on NBC). You can also follow along with Coach Fox via Instagram and Twitter, as he is onsite. As of this writing, Wilson is still hoping to qualify for another event in Tokyo, the 200 Breaststroke, with swims coming up on March 16th and 17th.

Lindi Schroeder '20 qualified for Tokyo by way of her 5th place duet performance at the 2021 World Series Super Final held in Barcelona, Spain, from June 10-13. Schroeder was a member of the varsity swimming and water polo teams while at Andover, even while maintaining an intense off-campus training schedule for her artistic swimming (formerly known as "synchronized swimming"). In a piece in The Phillipian, swimming coach Paul Murphy commented on Schroeder's dedication, “She was so awesome. She came to [Andover] as a synchronized swimmer, not as a competitive swimmer, but she made varsity swimming her first year and she was just an incredible athlete. She worked really hard and picked up some of the details that she needed to pick up that she didn’t get as synchro swimmer, but she needed as a competitive swimmer.” That work ethic combined with her aquatic talent has already earned the nineteen-year-old a spot on the national team since 2017 and a career's worth of accolades, including a bronze medal at the 2019 Pan American Games, qualification for the 2019 FINA World Championships, and a fourth-place solo finish in 2016 COMEN Cup. Of note outside the pool: she recently had the opportunity to meet John Legend, and appear on a segment for NBC's The Voice, as she and her Team USA teammate Anita Alvarez tested the singer to see if he could handle an artistic swimmer's workout.

We look forward to cheering on these three alums this summer and hearing more about their stories. Go Big Blue!