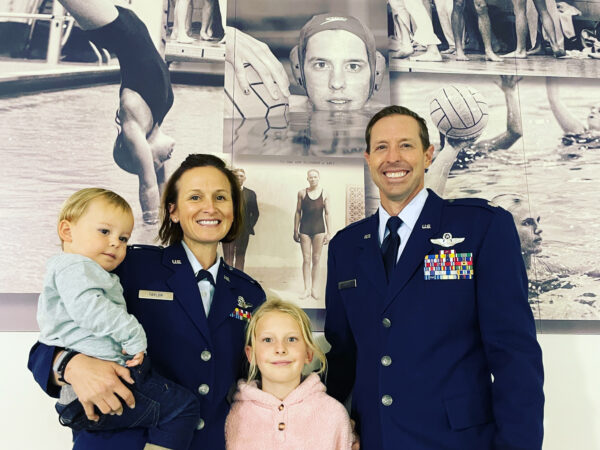 From the Athletics Committee of the Alumni Association:

"In boys' varsity water polo, he was the first ninth-grader starter in the school's history. During his upper year, Taylor led Andover to defeat Exeter in the NEPSAC semifinals and was later named New England Water Polo MVP. Taylor served as water polo captain as a senior, scoring a still-standing season record of 95 goals. He was named Andover's first--and still only--All-American in water polo.

"Also a varsity swimmer, Taylor was the New England champion in the 100 breaststroke and runner-up in the 50 and 100 Freestyle in 1995 and 1996. He was named an All-American in the 100 Breaststroke in 1995 and held multiple school and pool records, one of which stood for 22 years.

"At George Washington University, Taylor started on the water polo team all four years; the team was ranked 12th in the nation. Serving as captain his senior year, Taylor led the team in goals and steals and was named team MVP. He was also a member of the All-East water polo team for three consecutive years.

"After college, he played in both the U.S. Premier League and the National League in Australia. As a swimmer at GWU, Taylor was a 10-time Atlantic 10 Conference champion, held the A-10 record in three events, and qualified for the 2000 U.S. Olympic Trials in the breaststroke.

"In 2004, Taylor joined the U.S. Air Force and was commissioned as a second lieutenant. He has led more than 40 combat missions in Iraq and Afghanistan, flying more than 250 hours in combat, including multiple critical drops of supplies to forward operating bases.

"Currently, Taylor lives in Hawaii with his wife and two children and serves in Hawaii's Air National Guard flying the C-17."

"Thanks, Bret, for that overly nice introduction. I’m sure there are a few here that would tell you I was more than just confident here at Andover; some would say slightly egotistical and a few may even say cocky. But not to worry. 18 years in the military and 14 years of marriage have a way of bringing you back to earth and continuously humbling you. In the Air Force, while sitting in the bar after a mission, the only rule is that your story has to have 10% truth to it for the story to be acceptable, and I think you just met the 10% standard in that introduction, so thank you.

"Thanks to the Athletic Committee. I truly do not believe that I deserve to be up here next to these amazing individuals. I’m just not sure whatever it is that I achieved is worthy of standing before you today.

"Thanks to Jenny Savino and Mary Corcoran for always being so kind and generous with their time whenever I make it back to campus. You two always make me feel at home here and strangely after all this time it still does feel like home.

"I think Paul Murphy is here. I have to recognize and thank him. He was my water polo coach while here just a few short decades ago. I can safely say that he somehow looks better and more in shape now than he did then, which is impressive. Every time I see Paul, he reminds me that he doesn’t recognize me as easily without long hair. It’s been about 20 years of having my military-issued haircut, so he acts as a nice reminder that I used to be able to choose my own hairstyle. I can only hope that someday I can grow it back out and look like a hippy again. Thanks for all your mentorship and continued coaching over the years. I truly appreciate it!

"Most of you probably don’t know, but David Fox, who is the director of studies and boys’ swimming coach here at Andover, and I grew up in Tulsa, OK together. There are definitely pictures of me running around in diapers at his parent’s house while our parents had a swim club meeting. I challenge you all to find them; we’ll certainly all have a good laugh at my expense. Whenever I visit campus, he always invites me down on deck to relive my glory days while he puts the team through a practice or a meet. He loves to point out that I’ve been watching over the students from the big mural on the pool wall where there’s a small photo of me staring down over the pool. The kids typically laugh because they can’t believe anyone in that montage is still alive. David also loves to point out that I still have the goals in a season scoring record. He always follows that detail with a quick observation: “Rush really put the sibi in non sibi that year.” That is hilarious and, unfortunately, true.

"Like many things in life, I didn’t realize how much of an effect Andover had on me while I was here. It’s only when I reflect on my years spent here that I realize how lucky I am to have made it through (somehow). My years at Andover were by far the most formative of my life. I have my parents, family, and friends to thank for that. Without their love and support, I would not have come here, let alone mdke it through to graduation. It was seriously only a couple of years ago that my mom called me and happily relayed to me that she was mailing off the final loan repayment check for my time here. I know she agrees: money well spent.

"I owe a ton to my older brother, Ty, who is here as well. He was really the reason I found myself at Andover. The idea of going to the high school in Tulsa where he was already a force made me too scared to try and follow his footsteps. Insterad, I ran 2000 miles away rather than take on the challenge.

"Lastly, I have to thank my wife Brandee and our kids. I can’t imagine a life without them—even though it would likely be much calmer and quieter—and much more boring. I would not be who I am today without them. Brandee and I talk often of how to challenge our kids, to instill grit in them, to ensure they follow through and give back. To me, it’s a close parallel to the motto of non sibi. Almost every day we remind our precocious 8-year-old that tomorrow is a new day, and she can always be better and do more for other people. I often reflect on those conversations with her and think that I’m telling her those things and also using them as an affirmation for myself to do the same. I don’t necessarily think that I’m deserving of this honor, but I know that I have taken non sibi to heart and every day I, too, strive to be better and do more so thank you very much for this. I am humbled and honored to be standing up here." 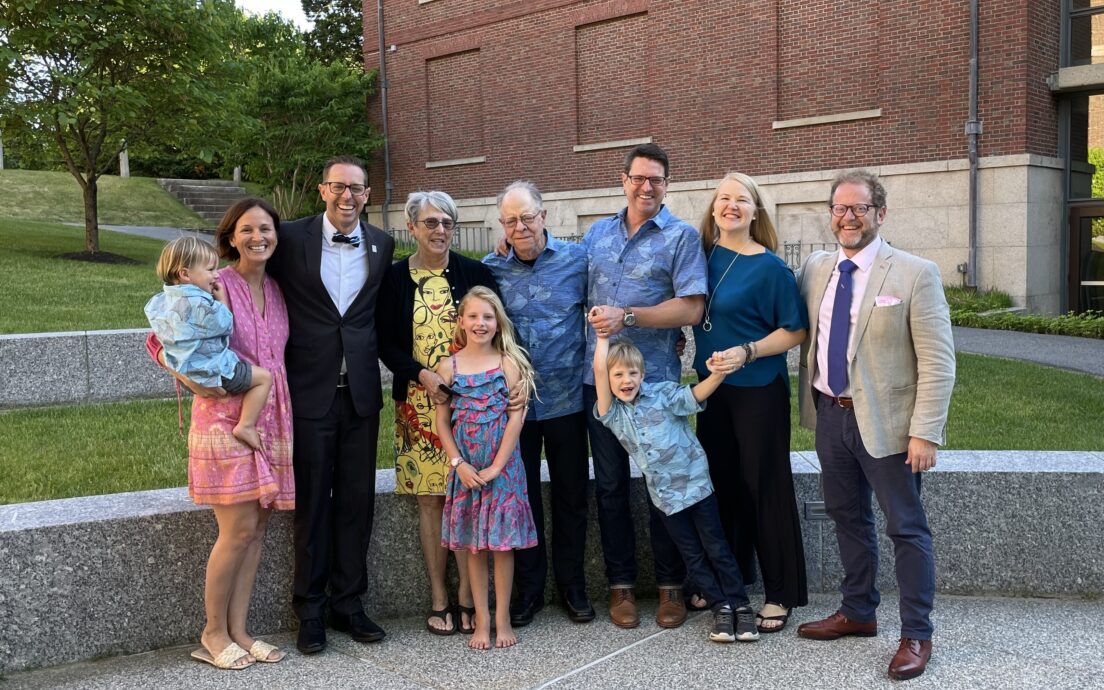