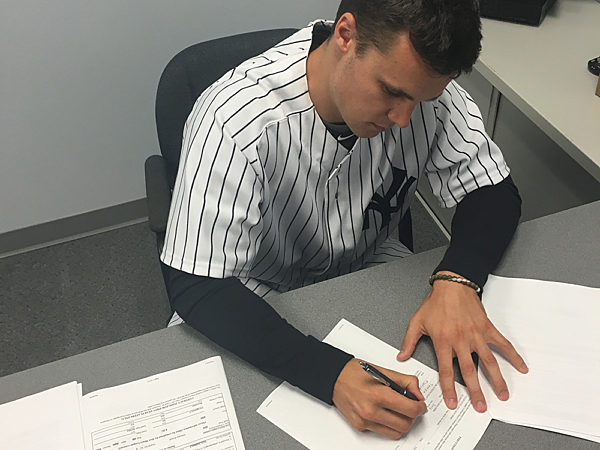 Phillips Academy Andover alumnus Curtiss Pomeroy ’12 edged ever closer to fulfilling his dream of playing Major League Baseball by signing a free-agent contract with the New York Yankees at the team’s Spring Training headquarters in Tampa, Florida this morning. Pomeroy was selected by the Atlanta Braves in the 28th round of last year’s 2015 Major League Baseball Draft but elected to forego the offer and play his senior season at Georgetown University.

Pomeroy transitioned from the infield to pitching midway through his junior season at Georgetown and caught the attention of pro scouts with a fastball consistently clocked at 94 miles per hour. In a recent private workout with the Yankees, Pomeroy’s fastball topped out at a blazing 97.

Pomeroy helped lead Andover to a 16-5 record and a Central New England Prep Championship in 2012. He anchored the defense at shortstop and led the team in batting with a robust .433 average on the strength of nine doubles, two homers, and 20 RBIs. Pomeroy paced the offense in slugging (.717), on-base percentage (.537), and runs scored (24) as well, stole eight bases, and did not surrender a hit in four one-inning mound appearances as the team’s closer. He was named First-Team All-Central New England Prep for his efforts.

Pomeroy is the first Andover player to sign with a Major League Baseball organization since Hugh Quattlebaum ’96 was selected by the Detroit Tigers in the 25th round of the 2000 MLB Draft. After a stellar playing career at Amherst College, Quattlebaum spent three seasons in the Tigers organization and another with the Baltimore Orioles, advancing as high as Triple A in 2003.