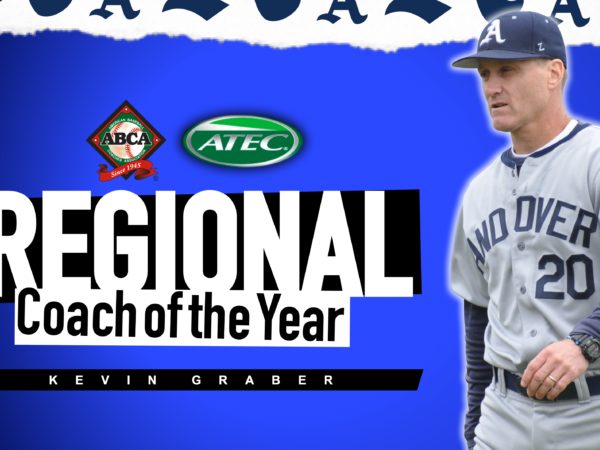 Phillips Academy Andover varsity baseball coach Kevin Graber was named Northeast Region Coach of the Year for the second time in the last three seasons by the American Baseball Coaches Association (ABCA) on Wednesday. The organization will recognize Graber during its ABCA National Convention in Chicago, slated for January.

Graber coached Andover to a 13-1 record, earning the No. 1 ranking in the final New England Baseball Journal Coaches Poll for the third consecutive season. The team also cracked Perfect Game USA’s National High School Rankings for the first time in school history, peaking at No. 19. and finishing the season at No. 26.

Graber has coached Andover to 11 straight Central New England Prep Final Four appearances, winning four championships in the last eight seasons, including back-to-back titles in 2012 and 2013, the school’s 10th Central New England Prep Championship in 2016, and another -- the program's 11th -- in 2018 (no championships were awarded in 2020 or 2021 due to COVID). The 2018, 2019, and 2021 teams finished those seasons ranked No. 1 in New England according to the year-end New England Baseball Journal Coaches Poll. In 2018, Graber was named Northeast Region Coach of the Year by the ABCA, New England Coach of the Year by the National High School Baseball Coaches Association (NHSBCA), and a finalist for National Coach of the Year by both organizations. He’s also a featured presenter each year at the World Baseball Coaches Convention at Mohegan Sun Resort and Casino in Uncasville, Conn., and he’s been selected to present at this year’s ABCA National Convention in Chicago.

This summer Graber helped coach the Bourne Braves to the championship series in the prestigious Cape Cod Baseball League.