While the previous evening's heavy rains and high winds forced some schedule shuffling, and an earlier-than-planned start, it had no effect on the intensity of the competitors or the school's fans.

The hosts came away with two victories on the day as girls' varsity soccer and field hockey defeated the Big Red. Those victories extended the dominance of those two Andover programs in the rivalry. Girls' soccer has not lost to Exeter since 2005 and field hockey has won the match-up eight straight times, only allowing Exeter three goals in that span. 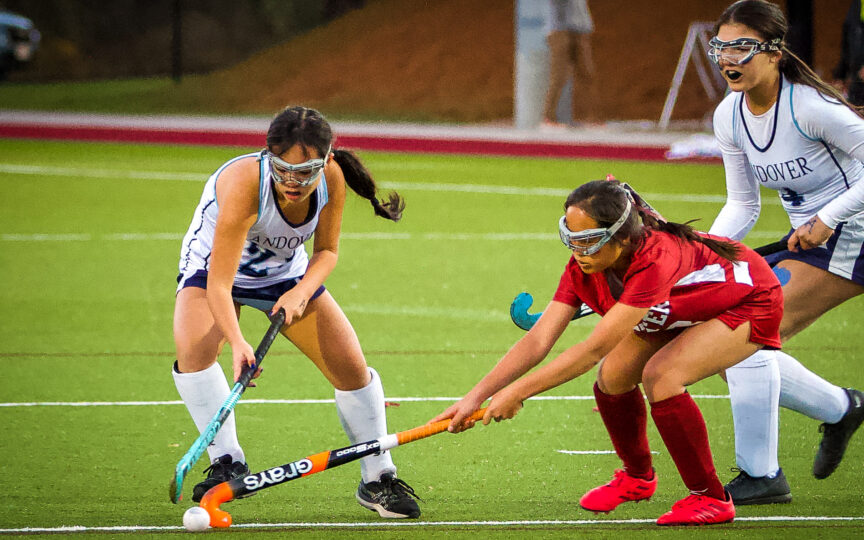 In this fall's JV A-E, Andover field hockey (pictured above) won, girls’ soccer and boys' soccer tied, and football and volleyball were defeated.

VIEW PHOTOS OF THE JV GAMES
Saturday at Andover

Highlights of the girls' soccer win.

Girls' Volleyball played next and, despite a strong regular season and a post-season berth assured, Andover were underdogs to the undefeated Big Red team. Andover only managed nine points in the first game, fourteen in the second, and a loss in straight sets seemed imminent, the team rallied together in the team huddle preceding the third game and whatever was said had an effect. Big Blue won the game 25-23 and nearly evened the match before falling in the fourth game 22-25. Read Coach Beckwith's recap here.

Andover was the fourth seed in the New England Class A tournament and fell to Loomis Chaffee on Wednesday. 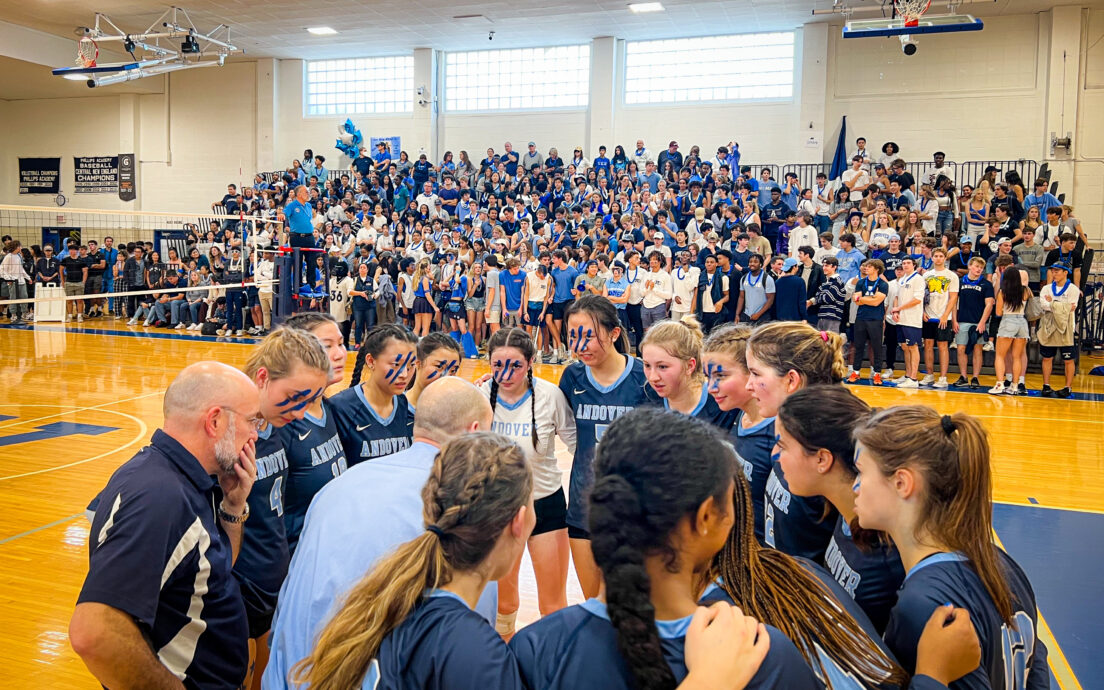 Girls' volleyball huddles in front of the Andover faithful.

Field Hockey, the defending New England champions, took the field in Phelps Stadium for the day's third contest. While Andover was the heavy favorite again this year and scored early on in the contest, Exeter fought hard and tied up the game before the first quarter concluded. Big Blue extended their lead to 2-0 in the second quarter and added two more goals to round off the 4-1 victory. Read Coch Dolan's recap here.

Andover was named the number two seed in the NEPSAC Class A Tournament and will play Saturday in the semifinals after defeating Westminster 2-0 on Wednesday. 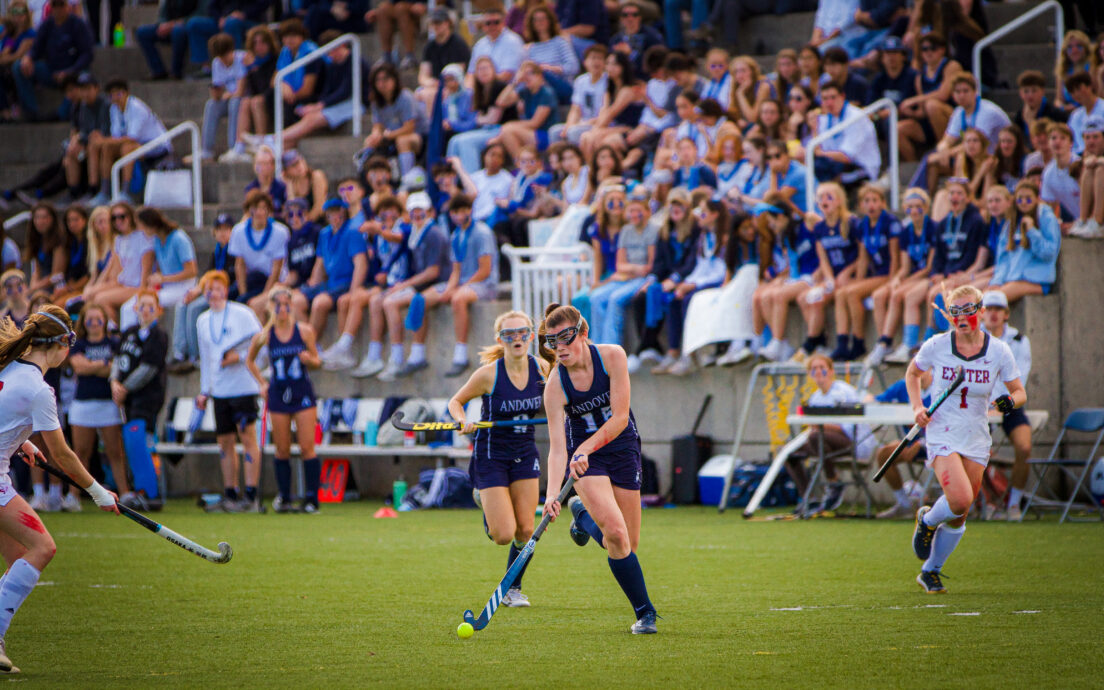 Field Hockey on the attack.

Boys' Soccer was up next in a match that would ultimately prove to have a "winner goes, loser stays home" determination for the New England Class A tournament. Unfortunately for Andover, the Big Red headed in a cross to take a 1-0 lead in the first half. Despite controlling possession for the majority of the second half and sending cross after cross into the final third of the field, Andover could not convert and lost the game, 0-1. 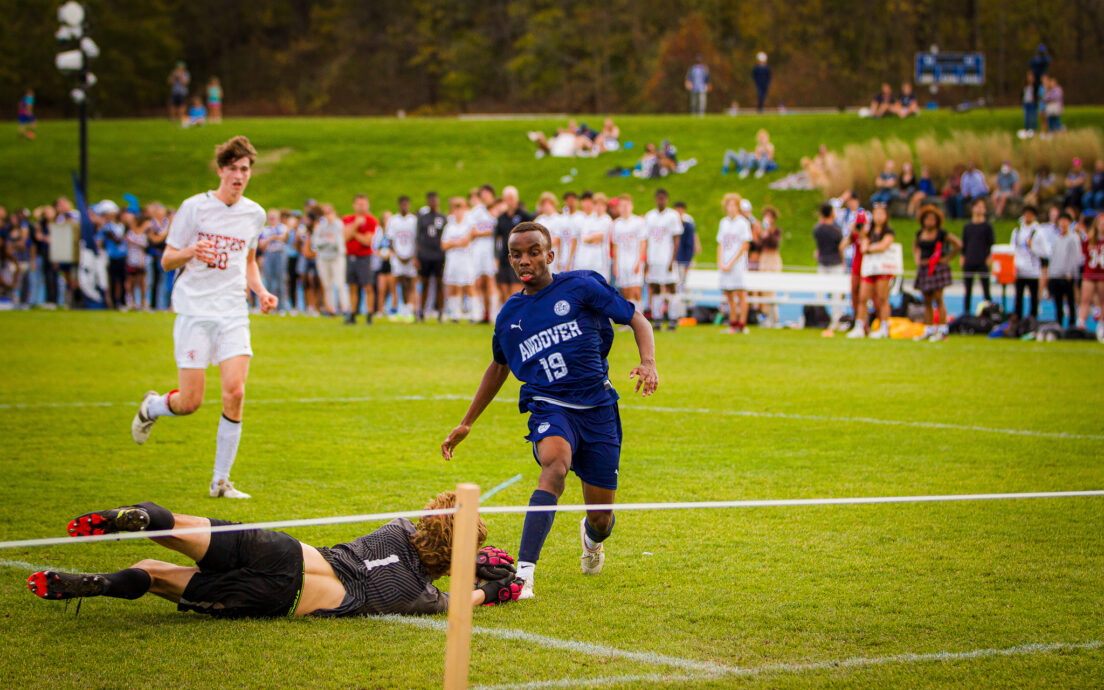 The day concluded with football and the visitors were the clear favorites, entering the day at 6-1 on the season as opposed to Andover's 2-5 record. Despite an initial sputter with a three-and-out series on their first possession, Andover's offense and defense looked strong, and the hosts held a 7-6 lead with under a minute to go in the first half. However, Exeter marched sixty yards down the field after an interception, scoring a touchdown to take the lead in the final seconds of the half. Despite a strong, well-rounded first half, Andover couldn't match Exeter's depth and experience, ultimately falling 7-42. With the loss, Andover's seven-game rivalry win streak that Exeter snapped last year moved further into the rearview, but there's always next year, the 139th football clash between the schools, to look forward to. 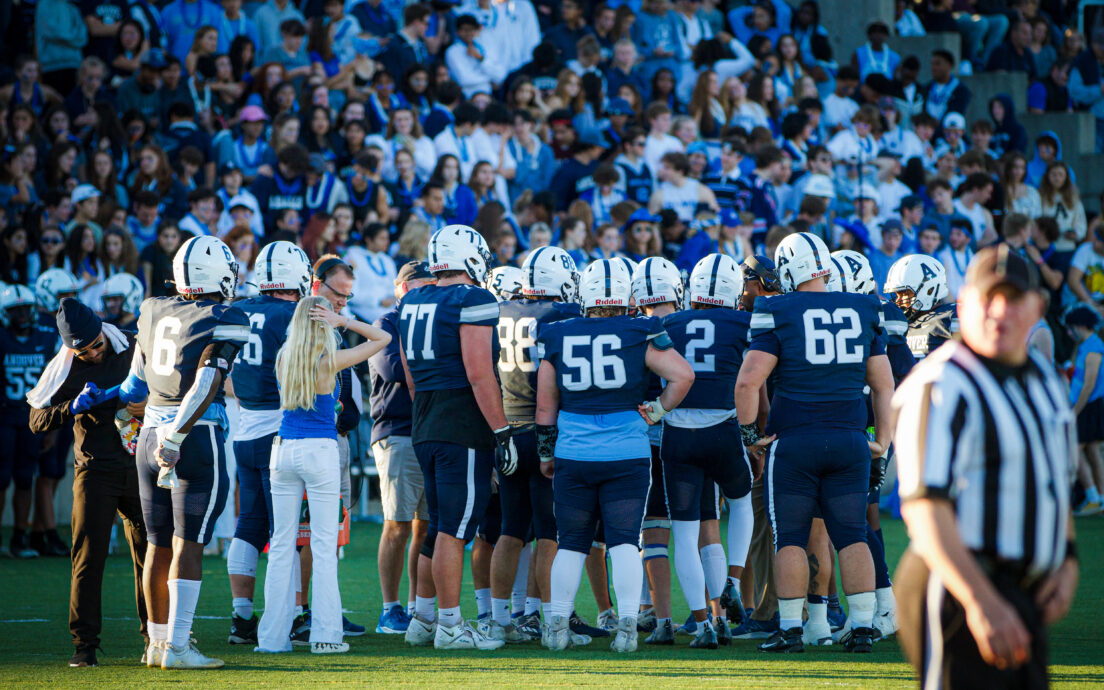 The oldest prep school rivalry in the country.

Thank you to Exeter for the enthusiasm and competition they bring to this, the greatest of prep school rivalries. Congratulations to the Big Red for their victories. We look forward to visiting them in February for the winter edition of the rivalry!