Since Gatorade began the award program in 1985, it has widely been considered one of the highest honors a high school athlete can earn. The company states the award, “recognizes not only outstanding athletic excellence but also high standards of academic achievement and exemplary character demonstrated on and off the field, distinguishes Johnson as Massachusetts’ best high school boys basketball player.”

The Penn State-bound senior has also won several other post-season awards including, “Co-Player of the Year” for New England Prep Class A (the fourth year in-a-row he has been named, “All-New England, Class A”), and garnered All-Area MVP honors from the Eagle-Tribune. Johnson finished his prep career as the all-time leading scorer at Phillips Academy.

Head coach Terrell Ivory ’00, who has coached some great players in his career, has long offered effusive praise of Johnson.

“Dallion is a special young man that has earned these awards as a result of an amazing work ethic. Four years ago he chose Andover because he wanted to challenge himself in the classroom and on the court. He has taken full advantage of all of the opportunities that Andover has provided for him. I have watched him continue to learn and get better each year. It is so great to see people recognizing the body of work that he has put together over the last few years. Penn State is not only getting a great student-athlete but they are also getting an amazing kid that has been a role model and a leader in our community. He has made me a better coach and I am definitely going to miss him. I am also excited to see all the amazing things that he will accomplish at the next level and beyond.”

The coronavirus pandemic has prevented Phillips Academy from celebrating the award with Johnson in-person, but absent of banners being unfurled and photo ops with his teammates on-campus, there has still been an outpouring of congratulations. Director of Athletics, Lisa Joel spoke on behalf of a proud Andover community.

“We are thrilled that Dallion has earned the recognition of Gatorade Player of the Year, the first Phillips Academy student-athlete to receive the award. Over the last four years at Andover, Dallion has consistently exemplified the qualities that this award applauds and that Phillips Academy also prioritizes, most notably a commitment to academics and character. A four-year starter, Dallion has been integral to the growing success of our boys’ basketball program. He will graduate as a three-year captain, the all-time leading scorer at Andover and most importantly, Dallion has set the bar for a genuine scholar-athlete for his teammates, his school and throughout the league.” 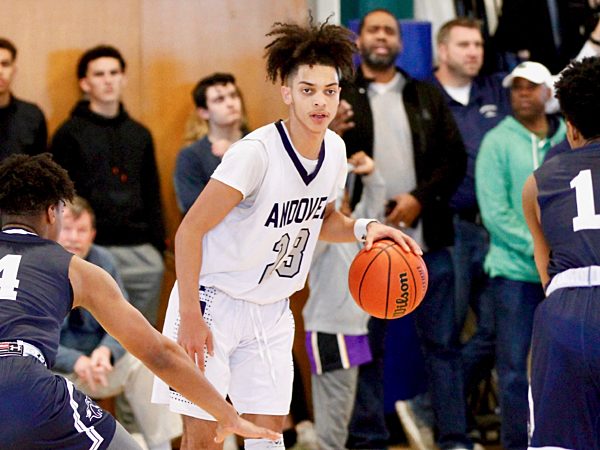 You’ve received, “All-New England” honors for all four years of your Andover career, but being named, “Gatorade Player of the Year” for Massachusetts is obviously an incredibly special distinction to receive. What does it mean to you?

It means everything to me. Last year, I sat down and wrote down some goals for the basketball season, one of them being to win Gatorade Player of the Year. Throughout the season, I thought about this goal and how great it would be to accomplish. Just the thought of it helped drive me through each workout, making me better and better. And finally to be blessed by such honor and accomplishment, I am so grateful for the Lord, my family, friends, coaches, teammates, and everybody who pushed me and helped me improve along the way.

This honor from Gatorade also gave you an opportunity to award a $1,000 grant to a local or national youth sports organization of your choosing. Where did you choose to donate the grant?

The Boys & Girls Club of Greater Haverhill. Now that I am older, I want to start giving back to the city that helped raised me in my youth.

There’s been a lot written already about the impact that Coach Ivory has had on your development, and he was openly and accurately predicting the type of player you’d become back when you were a freshmen. From a player’s perspective, how has the program at Andover, and Coach Ivory’s emphasis on skill development contributed to your growth as a player?

Mainly, it was coach just letting me do what I needed to succeed. In the beginning of my career at Andover, he gave me the green light to shoot the ball. During one practice when I passed up an open jump shot, I remember him yelling at me to shoot the ball. He said that he would take me out of a game if I ever did that again. He trusted and believed in my abilities from the start, and that helped me gain confidence and grow into the player I am today.

You’ve had several teammates at Andover that have gone on to find success playing basketball in college. Did any of them help or inspire your progression as a player?

My freshman year, seniors Kailan Lee (1st Team All-UAA at Rochester) and James Lewis (starter at Appalachian State) definitely helped my progression as a player. As a point guard, Kailan demonstrated many traits that I was inspired by. I wanted to have the ball in my hands more and run the show like he did, by not only scoring the ball, but distributing too. He is one of the reasons why I made the transition from primarily a shooting guard to a point guard. Also, James demonstrated a certain hunger and aggression through his play. He is one of the most competitive players I have played with. While grabbing rebounds and throwing down monster dunks, James was always ready to get after it. His game was definitely a contributor to the boost in my competitiveness and my desire to win.

What about off the court at Andover? What made you choose to come here four years ago and what has your experience been like?

Academics had always been important to me and my family, and it played a significant role in my high school decision. My parents and I knew that I would receive the best education at Phillips because it is one of the most prestigious schools in the nation. My experience has been wonderful. I have had some of the best and most intelligent teachers, coaches, and students, pushing me on and off the court. I cannot wait to see what I will be capable of at the next level.

What are some of your personal highlights from your Andover career? I can’t help but think of Andover-Exeter your freshmen year, at Exeter, your performance in this year’s NEPSAC Quarterfinals at Exeter, and, of course, becoming the school’s all-time scoring leader.

Definitely making the playoffs this year, the overtime win against Worcester my Junior (Upper) year at home, the 1,000 point game against Williston at home last year, and everything you asked about!

With all the different scholarship offers you had, why did you ultimately decide on Penn State?

I picked Penn State because my dream since I was little was to play high major Division 1 basketball, and I wanted to challenge myself by competing in the BIG 10, one of the best conferences in the NCAA. I also got this feeling that Penn State was the place for me on my official visit with my parents. I was impressed by Coach Chambers and the coaching staff and their connection with the players, and I wanted to be a part of that family.