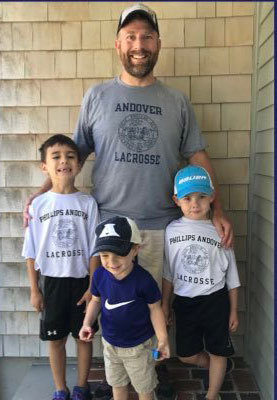 Andover is thrilled to officially announce James Beaudoin as the head coach of boys’ varsity lacrosse team. Coach Beaudoin will be joined on the sidelines by Coach Fenton and Coach Dolan, who have played an integral role in this search process. Coaches Beaudoin, Dolan, and Fenton are excited to work together with a talented group of Big Blue student-athletes.

Coach Beaudoin grew up on the campus of Proctor Academy (Andover, NH) prior to enrolling at the University of Vermont where he competed as a goalkeeper on the Catamount men’s lacrosse team. Following UVM, Coach Beaudoin has spent sixteen seasons coaching and teaching at the high school level, public and private, including Chase Collegiate, Proctor Academy, and for the last seven years, at Cohasset High School. Coach Beaudoin has amassed over 200 career wins and was named Boston Globe Coach of the Year in 2013 and 2018 as well as US Lacrosse Coach of the Year in 2009 for all Western New England private schools.

Even more important is Coach Beaudoin’s genuine commitment to supporting his players off the lacrosse field. Coach Beaudoin is inspired by the incredible tradition and foundation he can build upon as we look forward to the future of Andover boys’ lacrosse.

Coach Beaudoin is excited to be on campus just after the school year begins to meet the team personally.