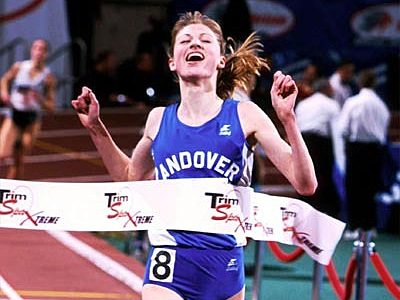 Alex Fleury '20 (North Andover, MA) has had an amazing four-year career so far at Andover, and he is making the most of his senior season. His race at the Millrose Games will not even be his first competition on the national stage in 2020, as he just ran at the New Balance Indoor Grand Prix, two weeks ago in Boston.

Fleury serves as captain to both the boys' cross-country team, and the indoor squad. Boys' Cross-Country coach, Patrick Reilly said of Fleury, "Alex's incredible focus and inspiring determination have led to brilliant performances on the track, and all the while, he has rooted himself in the supportive team culture and become a student leader who exemplifies the camaraderie and integrity of the sport."

Founded in 1908, the Millrose Games has a long and storied history. From being the oldest continuous athletic contest held at Madison Square Garden (1914-2011, before its move north in New York City to the The Armory), to hosting many of the world's greatest track and field athletes, the event has earned its billing as, "The World's Longest-Running and Most Prestigious Indoor Track & Field Competition".

Andover is already part of that history, as Melissa Donais '02 (North Andover, MA) won the high school mile at the 2002 Millrose Games. Donais was not considered a favorite in the event but she shocked her competitors, and the crowd, shooting out to a lead, and never trailing. Her victorious time of 4:53.90 at Millrose stands as the school record in the girls' mile. She went on to run at Yale, and still runs competitively. Of local note, Donais is also the granddaughter of the legendary runner and coach, Tony Sapienza, whose name graces the outdoor athletic complex at Haverhill High School.

On Saturday's Millrose schedule, Fleury will run in the, "New Balance Boys' Mile" at 3:26 P.M. You can watch the race on USATF.TV with additional event coverage on NBC Sports (check your local listings). New England Prep School Athletic Conference (NEPSAC) fans should know that two other league runners, Will Coogan (Phillips Exeter), and Matt Farrell (Loomis Chaffee) are also competing in the race. Two weeks ago, the trio faced off at the aforementioned, New Balance Grand Prix in Boston, with Coogan (4:14.93) finishing second, Fleury fourth (4:17.34), and Farrell seventh (4:19.91).